Vettel insists he is not afraid to go head-to-head.

Jan.20 (GMM) Sebastian Vettel insists he is not afraid to go head-to-head with one of F1's very best drivers, hinting his next move could be to Ferrari.

Red Bull's reigning world champion is under contract for the next couple of years, but some continue to question his talent compared to a driver like Fernando Alonso.

Kimi Raikkonen, after a two-year sabbatical and then two comeback years with Lotus, has joined Ferrari for 2014, demonstrating he is not put off by Spaniard Alonso's perceived position of dominance at the Italian marque.

But German Vettel insists he is not afraid to go head-to-head.

"Maybe someday I will be on the same team with Kimi or Fernando," he told Sport Bild magazine. 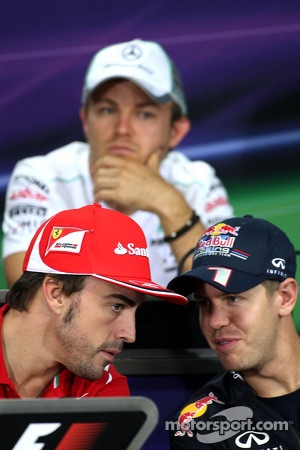 "You always want to beat the strongest opponents, so I'm not afraid," Vettel, who this year will be paired at Red Bull with Daniel Ricciardo, added.

Assessing Vettel's character, 1996 world champion Damon Hill said the German is nothing like his countryman, mentor and friend Michael Schumacher.

"That's what makes F1 interesting," he is quoted by the Times of India. "Vettel is like a puppy, so much enthusiasm, it seems the track is his school playground."

But Hill thinks Vettel could be in for a much tougher fight this year, having utterly dominated the second part of the 2013 season, winning nine races on the trot.

"The championship is likely to go down the wire this time," he said. "It's going to be unpredictable with double points proposed in the final race of the season."

Many believe it is Vettel's dominance that motivated Bernie Ecclestone to push so hard for the controversial double points concept. 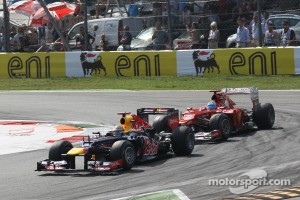 "It will make things exciting," said Hill. "I've heard a lot of people say it's stupid but why isn't it a good idea? Maybe it's a great idea."

Not surprisingly, Vettel has slammed double points as "absurd" because it unfairly penalises dominant drivers like himself.

But F1 chief executive Ecclestone told Autoweek: "I said (to him) 'don't be too sure that you are going to have an easy year next year'. There is nothing wrong with it for anybody."

Particularly, Ecclestone added, for the fans and the media.

"The press and television have got a story. (Double points means) the championship is not over. They (other drivers) still have a chance," he told F1 business journalist Christian Sylt.

Ecclestone also revealed that no one, not even powerful Ferrari, can veto the rule change now, as it has been approved by the World Motor Sport Council.

"It is what it is," a relaxed Raikkonen said during his visit to Ferrari's Maranello headquarters last week. "It's the rule and, like it or not, it isn't going to change."

The Finn is also laid back about the radical 2014 rules, despite many drivers predicting a huge challenge with the extreme torque of the new V6 engines.

"my feeling is that it's not going to be as different as people think," he said. "I might be wrong but hopefully we find out that it's pretty simple."

Meanwhile, Raikkonen showed that his recent back surgery appears to have been a complete success, leaping from the drivers' seat of a Ferrari road car over a puddle.