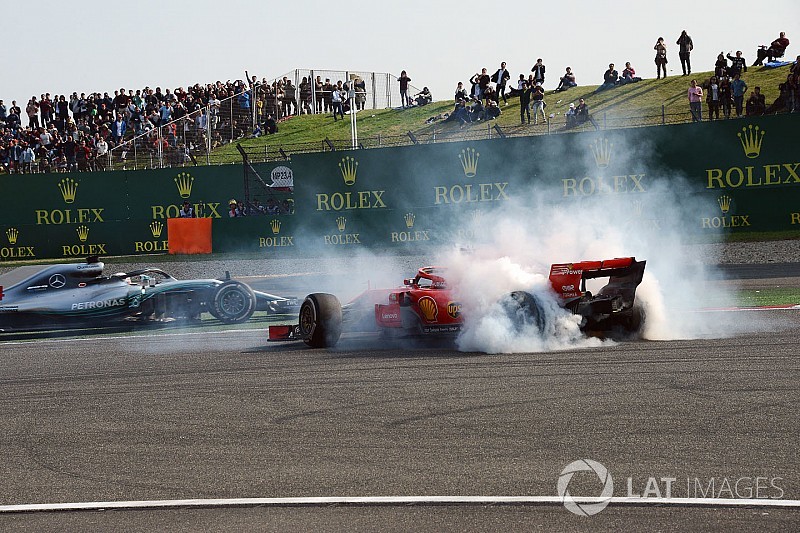 Vettel, winner of the first two grands prix of the 2018 F1 season, was tapped into a spin by Verstappen 13 laps from the end of the Shanghai race as the Red Bull caught his third-placed Ferrari having taken on fresh tyres during a safety car period.

Verstappen accepted full responsibility for the incident and approached Vettel to discuss it immediately after the race finished.

"He came up straight after. He realised that he did a mistake," said Vettel.

"I think he got it. He was quite composed and realised that he messed up.

"People were asking if it was a question of age, but it's not. He's done so many races.

"We had a bit of tailwind the whole race and after 41 laps you know that it's tricky to stop the car there. But it happens.

"I appreciate the fact that he came to me straight away. I told him that was the way to solve it, face to face and not through the media or blowing something up."

Vettel, who had led the first part of the race before being jumped by Valtteri Bottas in the initial pitstops, underlined that he would have let Verstappen past without a fight given their respective tyre situations.

Verstappen's teammate Daniel Ricciardo used the same strategy to charge from sixth to victory in the final part of the race.

"It was clear that the Red Bulls were faster," said Vettel.

"The way Daniel approached from behind there was no point to resist much and the same with Max.

"I think he had a bad exit onto the big straight, otherwise I was just ready to let him go. He wasn't there, so then you stay in front.

"I gave a bit of room just in case he had a tiny lock-up and then obviously he had a big lock-up... That's when we crashed."

Vettel resumed in sixth after the clash but struggled with a damaged car for the rest of the race and fell to eighth behind Nico Hulkenberg's Renault and Fernando Alonso's McLaren.

"I think in a way I'm lucky that I got to the end of it," Vettel added. "After a collision like that we might've stopped there.

"The lucky thing was the car was still working. Obviously the floor was damaged and the balance was gone.

"The car wasn't the same after that. It had a lot of understeer."

Verstappen was given a 10-second time penalty for the collision, demoting him from fourth to fifth in the results.

Hamilton "not in the best place" in China, says Mercedes