Sebastian Vettel says his Ferrari Formula 1 teammate Kimi Raikkonen is allowed to race for the win in the Italian Grand Prix after claiming pole position at Monza. 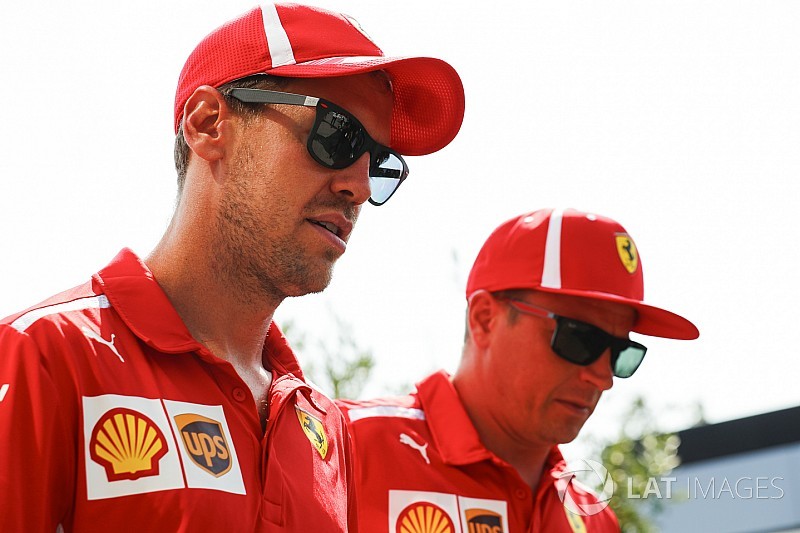 Raikkonen is a distant third in the championship, 68 points behind Vettel and 85 adrift of Mercedes’ Lewis Hamilton.

But despite the points gap - and the frequent suggestions that Ferrari prioritises Vettel - the four-time world champion says he assumes Raikkonen will challenge for victory on Sunday.

“If he is starting from pole I guess he is allowed to win,” said Vettel. “It is a long race, he wants to win, I want to win. So hopefully one of us will win.”

Vettel said he would be “a little bit” more careful into the first chicane as it is his teammate alongside him, but Raikkonen said he would drive no differently.

“We know as a team we can race but we need to be careful with each other,” said Raikkonen. “I don’t see how it changes for anybody.

“I don’t think anybody was purposefully take a stupid amount of risk to damage someone else’s car.”

Raikkonen ended a long run of near-misses in qualifying this year to secure his first pole of the season at Ferrari’s home race. Despite that, he said the result is not a relief.

“If this would be the first one then of course it is different,” he said. “We keep trying, sometimes it works out and sometimes not, it’s not as easy as it looks on TV.

“The whole weekend has been working pretty well, conditions have been changing.

“After practice, one of the three cars was going to get it. Today it was me but it doesn’t really change anything, tomorrow is the main job to be done.”

Raikkonen’s future at Ferrari is unclear but he appears to be heading for another contract renewal for 2019.

The 38-year-old said Monza was “probably the best place” to take the pole he has waited this season for.

“The second chicane on last run was pretty decent and enough for pole position,” he said. “It is a lot of games going first and getting out first and this and that, but in the end there was a train of cars and that is enough [for a tow].

“The car has been working well. We didn’t change the car since the first runs, so all running smoothly so far.

“Hopefully tomorrow is a similar situation.”