Sebastian Vettel has revealed a few of his biggest memories of Canada after returning to Montreal for this weekend's grand prix. 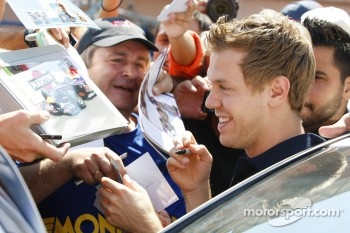 In 2007, then a teenager, he was in the pits when Robert Kubica crashed heavily in the BMW-Sauber, leading to his grand prix debut in the US a week later.

Four years on, German Vettel has won 15 of his 68 Grands Prix, sat on pole 20 times and is the youngest champion in F1 history, and in 2011 is back in Canada as the runaway title leader.

But the next chapter was a catering strike during his first-class flight from Switzerland this week, meaning he had to eat his own home-made sandwiches.

"I'm not a fan of airplane food," laughed Vettel.

To Blick newspaper, he recalls the eve of his last-minute debut in Kubica's BMW in 2007.

"Yeah, the Sauber mechanics one night dragged me into one of these famous sex clubs (in Montreal)," revealed Vettel.

"When two girls got busy with each other right before my eyes, it was too much and I left!"

And he said that last year in Canada, someone stole his credit card.

"By the time I noticed and cancelled the card, the stranger had already had a $600 dinner with wine at my expense," laughed Vettel.