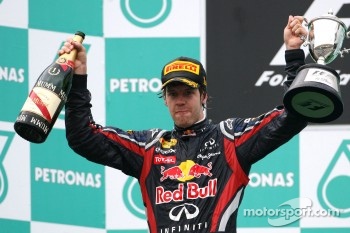 When the German started winning poles and races, observers noticed that he always showed a solitary index finger to spectators and cameras.

His countrymen in the German sports media enjoy the routine and before his so-far successful campaign kicked off, one newspaper headline pleaded for Vettel to "show us your victory finger!" in 2011.

Dutchman Verstappen admitted he has been impressed with championship leader Vettel and Red Bull's performances so far.

"They have made an incredibly strong impression," he wrote in his De Telegraaf column. "Even with their KERS problems they have the best car overall.

Sebastian Vettel is definitely the favourite for the title

"Sebastian Vettel is definitely the favourite for the title. I don't begrudge his success, but I find it really annoying that he arrogantly waves his finger after each triumph.

"I do have to say honestly though that if I had been in his position in my own Formula One career, I might have done the same," Verstappen, who secured two podiums from his more than 100 grands prix, added cheekily.