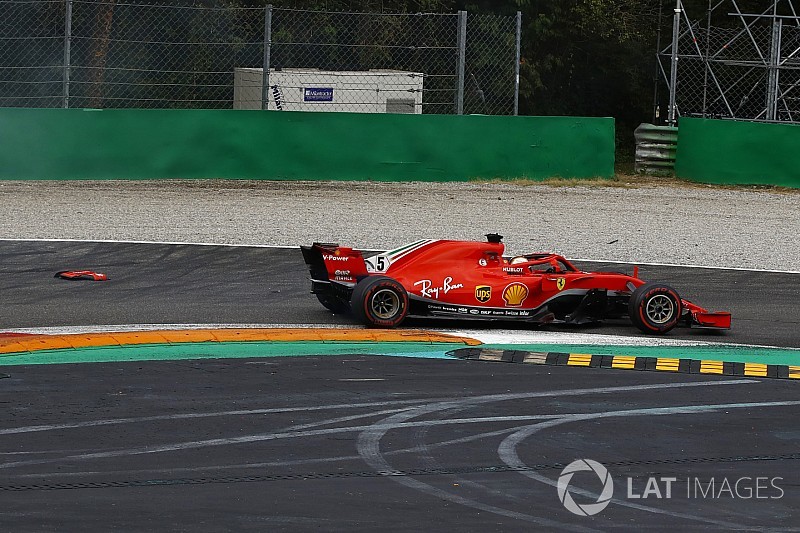 Sebastian Vettel is adamant Formula 1 title rival Lewis Hamilton squeezed him into his first-lap spin in the Italian Grand Prix.

Vettel could only finish fourth at Monza having spun to the back when he made contact with Hamilton as the Mercedes went around his outside at the Roggia chicane on the opening lap.

"Lewis obviously saw a little gap around the outside," Vettel told Sky Sports F1. "But then he didn't leave me any space and I had no other choice than to run into him and make contact.

"I tried to obviously get out of there but I couldn't. Unfortunately I was the one that spun around, which was a bit ironic. But it was that way."

Hamilton continued in second place behind Raikkonen after the incident, but escaped without damage and was able to snatch the win with a passing move eight laps from the end.

Vettel had to pit for a new front wing, then fought through to fifth on the road before gaining another place via a penalty for Max Verstappen.

"When you're looking the wrong way, things do not look too peachy," Vettel added.

"But from there I think I drove well and tried to recover. We still got a lot of points so it could have been a lot worse today.

"Obviously it doesn't help when you lose points but it's not the end of the world. We'll all still wake up tomorrow morning.

"For sure I'm down at the moment but mostly for the people [here]. Their support has been incredible. Unfortunately we didn't deliver.

"But then what can you do when if get spun round? It could have been a good race, but it wasn't. It was still very entertaining, probably more entertaining that way, but not very satisfying."

Ferrari had swept the front row at Monza, a week after Vettel's dominant Spa victory.

He insisted his conviction that Ferrari was currently faster than Mercedes meant the fact his championship deficit to Hamilton was the biggest it had been all year was nothing to be concerned about.

"I'm not too worried. I think we have the pace," said Vettel. "The points sound a lot but actually it doesn't take a long time to get them down."