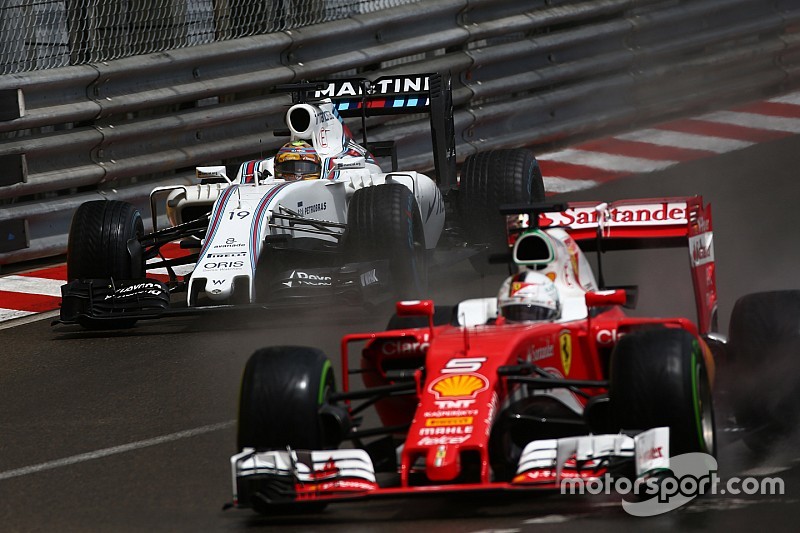 Sebastian Vettel says getting stuck behind Felipe Massa ruined any chance of fighting for victory in the Monaco Grand Prix.

The Ferrari driver pitted early for intermediates, while Williams rival Massa decided to stretch his stint on full wets for several more laps.

Vettel rejoined behind the Brazilian, but was unable to pass him despite running much quicker.

By the time Massa stopped, Vettel had already lost too much time and then got stuck in traffic again when switching to slicks.

"We were aggressive in the first stop, which I think it was the right call, but at that point I needed to find a way past Felipe, which I didn't," admitted Vettel, who ended up fourth in the race.

"That cost us all the momentum, and that's the reason why we then sort of tangled up with all that group.

"If I had cleared Felipe, then we would have focused more the first two positions rather than worry about the podium.

"That's when we lost the race. The car was quick enough to do better than where we finished.

Vettel finished 15 seconds off the lead after having opted to switch to soft tyres as leaders Lewis Hamilton and Daniel Ricciardo chose the ultrasoft and the supersoft.

With Hamilton having to do 45 laps on the softest compound, Vettel admitted he expected his rivals' tyre to drop off.

"I thought they were both on the ultrasoft, to be honest, but yeah, I expected them to run into trouble and that they had to stop again," said the German.

"The track was green and usually you struggle a little bit more with degradation, but both of them seemed to be fine until the end.

"I think it was the right call to go on the soft.

"It was the quicker tyre until the end. We closed the gap gradually to the leaders, but there was no chance to catch them unless they did another stop, which unfortunately they didn't."

Ericsson: Sauber told me to “go for it” before Nasr clash