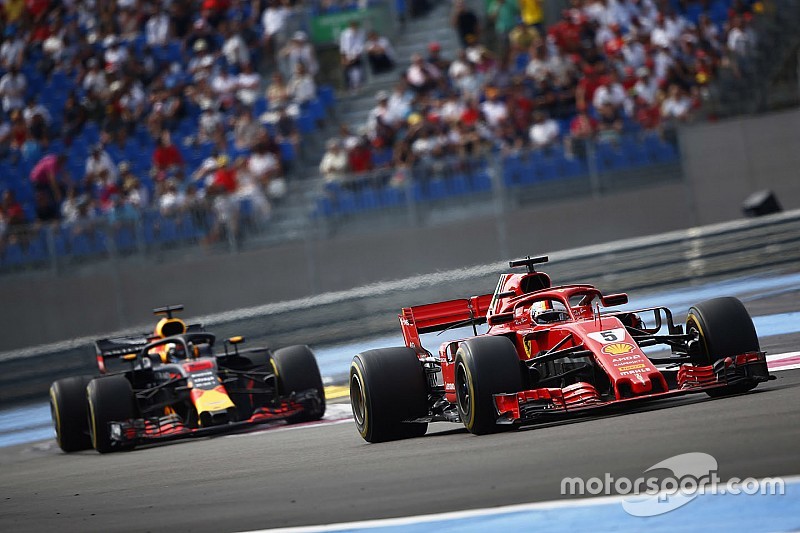 Sebastian Vettel was surprised by his recovery drive in the French Grand Prix and believes it would have been tougher to pass his Formula 1 rivals without wind assistance.

The Ferrari driver finished fifth at Paul Ricard despite having to pit on the first lap for a new front wing after hitting Valtteri Bottas at Turn 1.

Vettel, who also picked up a five-second time penalty for the incident, was helped by pitting for the wing change under the safety car his clash, and another on the opening lap, caused.

Speaking about his recovery, Vettel said: “Obviously I was out of position but I was surprised to be honest.

“I think it was to do with quite a strong headwind we had. From the east end of the track to the west end down the long straight.

“That was helping a lot because we were gaining a lot in the second part of the straights, which obviously made the tow quite strong.

“If the wind was the other way around I think it would have been more difficult.”

Vettel switched to soft Pirellis at his first-lap pitstop, which meant he was trying to complete 52 laps on the same set of tyres.

Pirelli brought its thinner tread rubber, especially made for the races in Spain, France and Great Britain, because of fears of higher degradation at the higher-speed circuits.

Ferrari struggled on those tyres in Spain but Vettel was happier with its performance in France, despite taking the chance to move onto fresh tyres late on when Mercedes pit Bottas for a second time and gave Vettel a free stop.

“Our strategy was a good call,” said Vettel. “There were no problems with the tyres.

“Kimi was able to sort of stay with that group. It proved that our strategy was a good call.

“For Kimi, he did more than 30 laps with the ultrasoft. Where I would have been, I don't know is the answer, because I had a different race after the first lap.

“We were a lot better than in Barcelona. We have made progress. I would have loved to have a different result, but we move on.”

Why Vettel’s small error could have big consequences