Sebastian Vettel laid down the fastest lap time on the Pirelli soft tyres in the afternoon practice for the FIA Formula One’s German Grand Prix. In his Red Bull-Renault, the German’s best lap was a 1:30.416; 0.235 of a second faster than Mercedes’ Nico Rosberg.

“I wasn’t so happy with the car this morning and Mercedes were quick, but in the afternoon we were in better shape. We’ll see, but so far I am happy," said Vettel.

The German clarified the outcome of the meeting on Thursday regarding the Pirelli tyres. "To be clear about yesterday and the GPDA meeting: the general agreement was that we’re happy Pirelli bought a new specification of tyre for this event and want to thank them for their flexibility and reaction times – they were able to find a solution in only a couple of days,” Vettel said.

Rosberg said, “It's a great track and a lot of fun to drive here with my current Silver Arrow.” 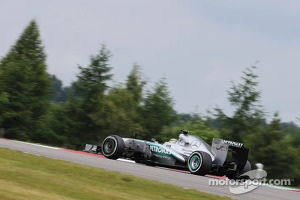 Yesterday, Rosberg and his teammate, Lewis Hamilton, toured the Nordschleife in two classic Mercedes-Benz from the past Formula One era of the Silver Arrow cars.

“It was an interesting day for us as we had to adapt to the new tyres. They are different and require a different set-up, so today was a good opportunity to learn something,” added Rosberg.

Third went to Vettel’s teammate Mark Webber with a 1:30.683, and he said that “It was okay today and we had dry weather, which was good – it meant we could get our runs done on both compounds and the new tyres seem okay.”

Showing their equality as teammates, Romain Grosjean just was a tad quicker than his Lotus-Renault teammate Kimi Raikkonen. The Frenchman’s best was a 1:30.843 while the Finn turned a lap time of 1:30.848 - five thousandths of a second separated the two.

“We had a pretty good day today. We ran the Device in the morning to gather some data then went back to our previous package for the afternoon, where we played with the setup a little but spent most of the time analysing the new tyres,” said Grosjean. 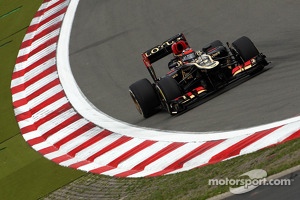 Raikkonen said, “We tried quite a few things today; some were good and some were not, so we have a good idea of what to do tomorrow. Our long run pace wasn’t as good as it could have been as we were running with a different setup which would have taken too long to change back during the session, but we now know which setup works better so it’s not a worry.”

Next up were the two Ferraris with Fernando Alonso at 1:31.056 followed by Felipe Massa.

Alonso was very positive after today’s practices as the Spaniard said, “Today went better than last Friday and even if there is still a long way to go, in general we seem to have made a step forward and returned to the level of competitiveness which we had prior to Silverstone.”

Massa was equally as pleased, and said, “As usual, choosing the right strategy will be very important. Qualifying remains our weak point, because usually we are less competitive than in the race and that’s why we will do our utmost to try and start from as far up the grid as possible. Over a long run, the car behaved well and this makes me very confident for Sunday”.

The top time in the morning practice was set by Lewis Hamilton but the Briton was unable to match the hot laps during practice 2, and ended up eighth best in front of his old teammate from McLaren, Jenson Button.

Said Hamilton, “This morning went pretty well and the car felt good, but then we made some changes which didn't quite work out for us this afternoon.” 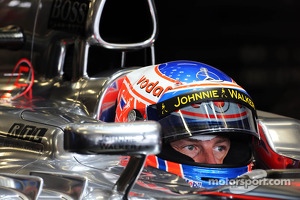 McLaren-Mercedes driver Button was ninth and the Briton said, “The car felt pretty good as soon as I drove out of the garage this morning. We’re still a way off the front, but our pace relative to the cars around us doesn’t seem too bad. The overall feeling with the car is not so bad.”

The ongoing discussions about the Pirelli tyres took center stage over the actual on-track activities as Vettel commented: "To be clear about yesterday and the GPDA meeting: the general agreement was that we’re happy Pirelli bought a new specification of tyre for this event and want to thank them for their flexibility and reaction times – they were able to find a solution in only a couple of days. The circumstances that we raced under in Silverstone were not what we can accept, but I don’t think we will see those issues again.”