Hispania Racing keeps on growing with skilled and expert Liuzzi

Hispania Racing is pleased to announce that Vitantonio Liuzzi will take part in the 2011 FIA Formula One World Championship as its second driver. With this appointment, the Spanish team's line-up is complete for the upcoming season with the Italian driver joining Narain Karthikeyan behind the wheel of the F111.

I never lost hope to be in Formula One as I knew I have the experience and the right attributes for a young and ambitious team.

The Italian driver started making a name for himself in the late nineties, emerging as one of the brightest talents in world karting. Evidence of this showed in 2001 when he claimed the prestigious FIA/CIK World Karting Championships. Alongside this title, Tonio finished in a remarkable second position in the 2001 German Formula Renault Championships.

In 2004, Liuzzi stepped up to F3000 where he stormed to the championship in a season that included seven wins out of ten races. This impressed Red Bull Racing who signed him up as its test and reserve driver for the 2005 season. He got his first taste of competitive Formula One that same year when he replaced Klien for the San Marino, Spanish and Monaco Grand Prix. Tonio showed his potential by scoring his maiden point (8th place) on his debut at San Marino. 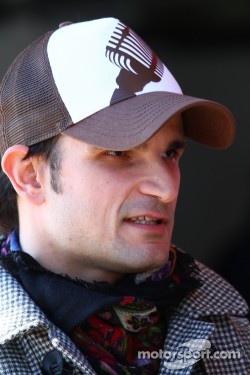 In 2006 and 2007, the Italian raced for Toro Rosso achieving his highest ever placing: 6th at the 2007 Chinese Grand Prix. Liuzzi moved on to Force India where he stayed from 2008 to 2010. With the Indian team, Liuzzi equalled his best finish of 6th at the 2010 Korean Grand Prix and ended the 2010 championship in 15th scoring 21 points, a career best.

After testing for Hispania Racing in Barcelona in February, Liuzzi will again be at the helm of the F111 in March's Barcelona tests and will make his debut for the team at the Australian Grand Prix later this month.

Colin Kolles, Hispania Racing Team Principal: "I have known Tonio for many years as he raced with me in lower categories. He is a very professional driver who will bring a lot of benefits to the Team. I am convinced about his skills to develop a car and his speed. He has shown this in the past having contributed to a large extend developing and moving a back grid car to the front. I had the pleasure of working with him and I am very happy and proud to have him racing with Hispania Racing."

Vitantonio Liuzzi, Hispania Racing driver: "I am really happy to have signed this agreement with Hispania Racing. I never lost hope to be in Formula One as I knew I have the experience and the right attributes for a young and ambitious team. I face a new challenge now and this excites me. I also face a lot of hard work in guiding Hispania Racing through the development of our new car. I am extremely grateful to Jose Ramon Carabante and to Colin Kolles for giving me such an opportunity".