Sergio Perez will be hoping to build on his consecutive points finishes in India and Abu Dhabi, while Jenson Button will be looking to score points for the 13th time this year.

“I had one of my most enjoyable races of the season at the Circuit of the Americas last year – I’d struggled in qualifying, starting 12th, but just got my head down on Sunday afternoon, had a great fight, and eventually finished fifth, which was extremely satisfying.

“The first sector of this circuit ranks as one of the best parts of a racetrack anywhere in the world. The first corner is really tricky, because it’s steep and blind, after that, the circuit just winds through an incredibly fast switchback until the heavy braking for the back straight. 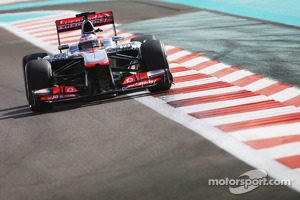 “After such an intense start to the lap, the straight offers a bit of a breather until you commit once again to the final sector, which is a series of slow-speed, quite technical corners. Again, there’s a real variety of corner here, and it’s fun to nail the sequence. It’s definitely a place where accumulated knowledge of the layout can add to your speed.

“I’m optimistic that the track will suit the high-speed characteristics of our car, which showed improved pace in both India and Abu Dhabi. After a couple of difficult races, it’d be great to get a strong finish for all the Formula 1 fans in the US.”

“Texas is on the border with Mexico, so the venue provides the perfect opportunity for many Mexicans to make the trip to Austin for a taste of Formula 1. Last year, I was really overwhelmed by the level of Mexican support – you could see the grandstands full of Mexican flags, and the fans that I met were all really passionate, enthusiastic and knowledgeable.

“For a first race, Austin put on a fantastic show.

“For me, this will be the most important weekend of my year, and I’ll be especially keen for a strong result to send my fans back home with a smile on their faces. I think we’ve shown some solid improvement and greater understanding of our car over the past few races, yet, frustratingly, both Jenson and I have had few opportunities to really demonstrate what the car is capable of.

“I’d love another chance of a race like India, where I was able to push throughout the entire race and get some strong points for the team.”

“I was so impressed by what we witnessed last year – it was one of the best-organised and most enjoyable races of the season, and with none of the teething problems you usually associate with a new venue. The city of Austin, too, really rose to the occasion – and I know that the entire F1 community was hugely pleased and proud by the way Austinites everywhere made us feel so welcome.

“For Checo, the weekend will be a busy and important one – it’s the closest he gets to his home in Mexico, and he’s naturally excited and looking forward to the amount of local support and expectation that will be focused on him across the weekend. He will respond to it very well, I’m sure.”