The Vodka V-10 brand is being displayed on the Jordan Ford EJ13 cars for the first time during this weekend's opening round of the Formula One World Championship in Melbourne. A new sponsor or a new engine?. Photo by Jordan Grand ...

The Vodka V-10 brand is being displayed on the Jordan Ford EJ13 cars for the first time during this weekend's opening round of the Formula One World Championship in Melbourne. 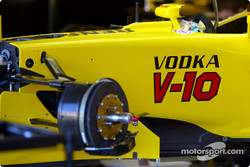 A new sponsor or a new engine?.
Photo by Jordan Grand Prix.
Produced by Jordan Brand Ltd, a company established three years ago to create fresh opportunities for the Jordan name to generate revenues for the team, Vodka V-10 entered the premium packaged spirit (PPS) market in April 2002 and is currently sold in the UK, Spain and South America. It combines Jordan's successful energy drink, EJ-10, with two shots of vodka.

"When we established Jordan Brand we aimed to generate new business opportunities and revenues which could be ploughed back into the team," confirmed Eddie Jordan. "We have positioned the EJ-10 brand on the cars before, notably at the British Grand Prix, but the success of Vodka V-10 is such that we have opted to promote it further through on-car branding here in Melbourne."

"At a time when the sponsorship environment is very challenging it's rewarding that we have been able to generate revenues for the team through our own endeavours in new areas of business. Hopefully the weekend will bring us something to celebrate, which is when Vodka V-10 will come in handy!"

Formula 1: Netflix would ‘think about’ buyout to stream races