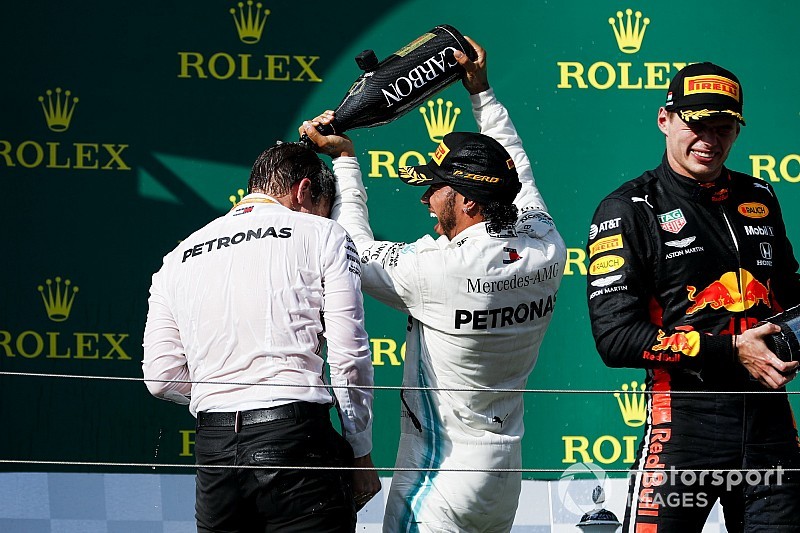 Mercedes' Formula 1 strategy director James Vowles says he "embarrassed" himself after dropping a champagne bottle and "fumbling all over the place" on the Hungarian Grand Prix podium.

Vowles was chosen by Toto Wolff to accept the constructors' trophy because of his specific contribution to Lewis Hamilton's race win.

Vowles says that he was blinded by a champagne shower from Hamilton – which he was unable to avoid because the world champion jumped the gun at the end of the national anthems and got his attack in before the strategy guru was expecting it.

"The feeling when you win a race, and that you and your team have delivered everything across the race weekend, and that you are part of that result, is incredible," Vowles said in a team video.

"You feel your heart beating in your chest the whole way through. You feel all the emotions coming out in one go. You would have seen Toto's expression of joy as well.

"That's nothing compared to being able to go onto the podium and have the privilege of representing the team. It's emotions like no other.

"You are up there, and you can see thousands of people looking back at you. And you realise you are part of something incredibly special, and you are a part of history.

"That emotion is something that will stay with me forever, and I am really thankful to have been able to do that multiple times.

"When you are up there though, what you learn very quickly, is Lewis has been there far more than you have. And he knows what to do.

"And from four seconds, because I counted it, before he should have really picked up the champagne bottle, he had picked it up, shook it, and he had spayed it in my eyes. You are now blind, you can't see anything at all.

"What's more, it's now dripping on the ground, I'm fumbling all over the place, and I appreciate I embarrassed myself. I'm really thankful for everything, and I'm so glad I had the opportunity to be there and it's an emotion and a memory that will stay with me forever."

Vowles also revealed that "morsels of data" from practice allowed Mercedes to predict how the hard tyres used by Max Verstappen would behave in the race.

All teams were badly compromised by a lack of dry running on Friday, but Vowles says Mercedes was able to construct models that crucially allowed the team to predict that Verstappen's tyres would fall off the cliff, and ultimately enable Hamilton to catch and pass him on fresher rubber.

"Going into the race we had less data than normal due to the wet running on Friday," said Vowles. "No one had long run the hard tyre, run it with fuel to understand how the wear, the degradation and how it would progress in the race.

"And that creates a lot of unknowns. Everyone went into the race, ourselves included, with the intention of one-stopping. It is incredibly difficult to overtake in Budapest, and the tyres should make it based on our forecasts of life.

"As we went in it was clear there was no undercut opportunity, our next plan was to offset ourselves
on tyres relative to Verstappen. And then force him into a situation where he is using his hard tyre resource as much as possible, and maybe put him off the curve.

"As Verstappen and Lewis started to pull away from the field, it became obvious that other opportunities existed, which in our case, was a two-stop.

"We have a team behind the scenes that are working tirelessly. They took the morsels of data from Friday, the little running that we had, and constructed models as to how our tyres and Verstappen's tyres would perform during the race. And they were spot on.

"It is those models that enable us to understand that two- stop would very much lead to a fantastic situation at the end of the race, and that Verstappen's tyres should drop off the curve if we can pressure him enough. Once we had committed and pitted Lewis, it was clear that there was this huge mountain to climb.

"We had twenty seconds of race time that we had to make up, and then we had to overtake Verstappen at the end of the race. Lewis, rightly so, had concerns about that but every lap he delivered the lap time we needed in order to do that.

"It caused Verstappen to have to respond and fight hard and use the tyre he had available to him to pull that gap further, but it was with no avail, ultimately, he fell off the tyre curve, as the team predicted, and we ended up with the win."