Williams' Mark Webber put in a last gasp effort to set the fastest time of the weekend so far in the final practice session for the Bahrain Grand Prix. The Australian clocked 1:29.527 to go to the top in a morning that saw the times dropping ever ...

Williams' Mark Webber put in a last gasp effort to set the fastest time of the weekend so far in the final practice session for the Bahrain Grand Prix. The Australian clocked 1:29.527 to go to the top in a morning that saw the times dropping ever lower. Toyota's Ralf Schumacher was second quickest, two tenths behind, and the Renault of Giancarlo Fisichella was third. 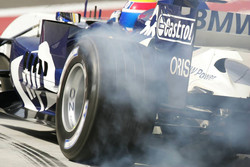 Another hot and sunny day greeted the drivers at the start of the first session and initially it was the Minardis of Christijan Albers and Patrick Friesacher that ventured out for installation laps. After ten minutes Jordan's Narain Karthikeyan joined the track, which was around 30 degrees -- the temperature is expected to rise to near 50 for this afternoon's qualifying.

Sauber's Felipe Massa clocked 1:34.797 on his initial efforts, he and Friesacher the only ones to put up a time in the first 20 minutes. Ralf was next to join and took over the top spot, 1:34.493 for the Toyota, and BAR's Takuma Sato posted third. Christian Klien's Red Bull took over at the front, 1:34.186, and his teammate David Coulthard followed into second.

Jenson Button's BAR had a slow start but quickly climbed to fifth and Jacques Villeneuve joined in 10th in the second Sauber. With five minutes remaining a few more made an effort; Fisichella clocked third on his first attempt and teammate Fernando Alonso went one behind. Pedro de la Rosa made his presence felt for McLaren when he took second, two hundredths off Trulli.

Karthikeyan was doing a bold job in fifth, ahead of the Renaults until Alonso popped in a 1:32.260 for half a second up on de la Rosa. The Williams of Nick Heidfeld took 10th, only to have the position fall to teammate Webber. Alonso belted out a 1:31.811 to improve his top time and Webber improved to seventh.

Michael Schumacher, who had been pottering about in the midfield, wound up a 1:30.552 for the top at the end of the session. The Ferrari F2005 was over a second ahead of Alonso's Renault and marginally quicker than the best time of McLaren's Alex Wurz on Friday. A warning shot from the reigning champion?

The track temperature was edging close to 40 degrees at the start of the second practice. Rubens Barrichello, who had not left the garage in the earlier session, was a subject of much speculation. His Ferrari suffered a gearbox problem that left him out of the action for Friday afternoon and it seemed debatable if he would get on track this morning.

Kimi Raikkonen, who had an unnoticeable first session, was quickly out and the McLaren posted 1:33.160 to start with. Villeneuve took second then Ralf ousted Raikkonen with a 1:32.343. Trulli joined in third and Sato in fifth, then Alonso went to the top with a 1:32.118. He was quickly demoted by de la Rosa and Klien in succession but both fell to Button's 1:30324, the fastest yet.

Alonso improved again to second after being shuffled down the order but de la Rosa and Klien followed suit to demote him to fourth. Fisichella posted fifth and Michael closed the gap to leader Button to just a couple of hundredths. Massa took seventh and Coulthard 10th, while Webber loitered in 13th. Raikkonen got bored of idling around in the midfield and posted 1:29.810, half a second up on Button.

Alonso moved up yet again to second then Trulli shot to the top with a 1:29.798, just one hundredth quicker than Raikkonen. Klien was looking feisty to improve to fourth but was knocked down by de la Rosa doing the same. Ralf shaved off a few hundredths from teammate Trulli for the top, 1:29.711. Fisichella moved up to second, again a gap of just a couple of hundredths from the leader. The top four at that point were less than a tenth apart.

Right at the end Webber fired out a 1:29.527 to go fastest by nearly two tenths. The top 11 were under a second apart, which hopefully promises a great fight in qualifying this afternoon. Barrichello never made it out onto the circuit this morning, so mixed fortunes for Ferrari. Toyota and Renault look very competitive and McLaren was in the mix as well. Williams is biding its time and Red Bull is once again proving its worth.

With the times so close it's impossible to guess who is favourite for provisional pole. It seems likely, based on the performances so far this weekend, it will be a Renault or a Toyota, and Michael is not slacking. Your guess is as good as mine. Final top eight classification: Webber, R. Schumacher, Fisichella, Trulli, Raikkonen, Alonso, de la Rosa, Klien.