Mar.20 (GMM) A typically hot, humid and thundery weekend is forecast for the Malaysian Grand Prix. 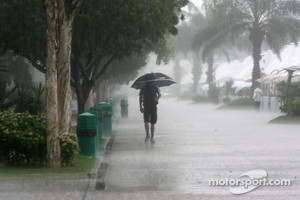 And as ever in tropical Malaysia, the highest chance of rain is always in the late afternoon.

"Bernie (Ecclestone) loves a late start," smiled Red Bull's Mark Webber, "and, once again, the race has a late kick-off."

Indeed, qualifying and the race are not scheduled until 4pm local in Malaysia, ensuring a more civil early morning wake-up for F1's bulk live audience in Europe.

"Late afternoon is usually when the rain comes in Malaysia, and when it comes you know about it," said Australian Webber. "It's something to be wary of."

Late afternoon is usually when the rain comes in Malaysia

Even more nervous about the rain forecasts will be HRT.

"In Australia we were only able to complete seven timed laps so I need to get more track time, get to know the car better and improve the setup," said de la Rosa.

Ferrari: Two sides to Malaysia for the Scuderia