Sep.26 (GMM) Charlie Whiting has given Austin's new Circuit of the Americas the green light to host its inaugural US Grand Prix in November. 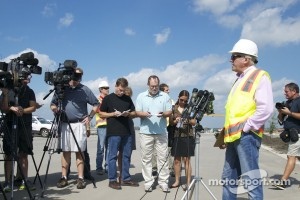 We reported on Tuesday that F1's highest-ranking FIA official was at the brand new venue for an inspection.

"Everything I've seen has been absolutely first class," Whiting is quoted by the Austin American Statesman newspaper. "Progress since last time I was here has been amazing."

Asked how the F1 world will react to the venue, he said: "I think they'll all be really stunned."

Walking the entire layout on Tuesday, it was Whiting's third inspection of the Austin venue, with the last to take place on the Monday before the race.

"It's not supposed to be totally ready now," he explained, "but we can see quite clearly that it will be (ready) without any problem at all."

He said the best feature of the layout is turn 1; a sharp corner after a steep climb.

"Awesome is the only word I can find to describe it. Drivers and teams alike coming here for the first time are saying the same thing," said Whiting.