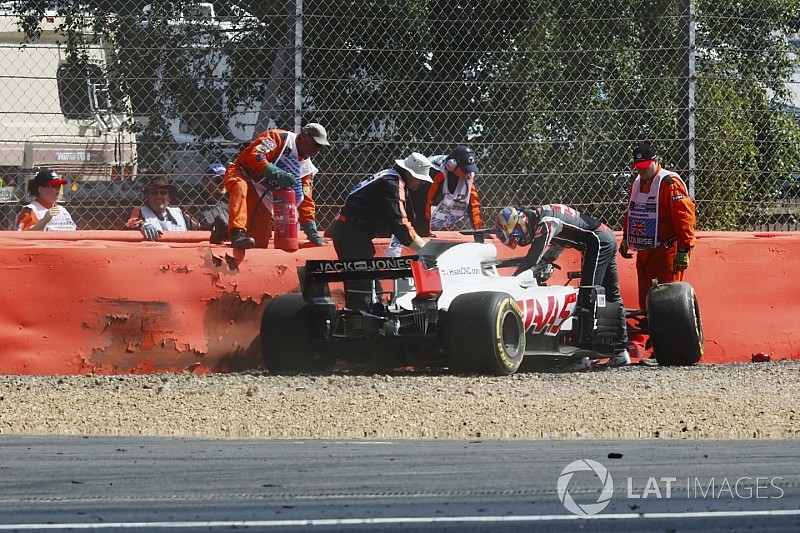 FIA race director Charlie Whiting says the crashes in the new DRS zone during the British Grand Prix weekend were a consequence of "driver choice" and no different to other accidents.

The third DRS zone at Silverstone, running through the pit straight as well as Turn 1, Abbey, and Turn 2, Farm, was a factor in two major shunts during the weekend.

Romain Grosjean crashed at Turn 1 in practice, leading Lewis Hamilton to call the new DRS zone "a pointless exercise" and "just dangerous", before Marcus Ericsson went off in a similar incident in the race.

"I think the incidents where drivers lost control through Turn 1 because they had their DRS open through Turn 1 is a driver choice, just like any other choice you make on a car," Whiting said afterwards.

"It's like any car that is challenging to drivers, and sometimes they try to do it flat when it's not really flat, and they spin.

"It's the same thing, it's their choice. If they thought they could do it, they can try it. It's not a requirement to do it.

"It's like any other choice that teams and drivers make."

Whiting admitted, however, that the new DRS zone did not do much to aid overtaking.

"I don't think it actually helped," he said.

"The idea was that drivers might get a little bit closer than they would have done otherwise, and therefore be in a better position to attack on the straights between Turns 5 and 6."

Although he felt the Silverstone DRS layout added an extra challenge, Whiting said he was not in favour of returning to the past regulations that allowed drivers to use DRS wherever they wanted to on a lap.

"I don't think there's any point because all you're doing is creating faster laptimes.

"The whole principle of DRS was to help overtaking and to allow them to use it in the places you can use it in the race seems entirely logical to me. I wouldn't be in favour of going back."

Whiting confirmed that Hockenheim will have an extra DRS zone, and that the main one – on the run to the hairpin – will be extended.