When Ferrari won the first few races of 2004 there was a collective groan of dismay from some fans and teams alike. In 2005, there is a sense of anticipation to see if the team that has won the first two events can do it again -- because this time ...

When Ferrari won the first few races of 2004 there was a collective groan of dismay from some fans and teams alike. In 2005, there is a sense of anticipation to see if the team that has won the first two events can do it again -- because this time the team is Renault. The prospect that the French squad could make it three victories in a row in Bahrain seems much more interesting than the scarlet cars doing the same thing. 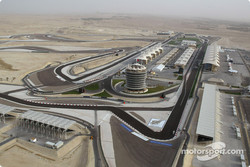 Ferrari's stranglehold on F1 last season unsurprisingly led to the belief that the same would happen this year. But while we do have one team looking very strong so far, the fact that it's Renault makes a nice change. How opinion may change if Renault dominates the entire season remains to be seen, but for the moment it's a just a relief that Ferrari hasn't charged off into the distance again.

However, it's still early days yet and while the Scuderia hasn't shone in the initial races, the F2005 will appear in Bahrain. Naturally the team is talking up the performance of the new car but seeing as originally it was not due to debut until Spain, there have been suggestions that it's a bit of a rush job. However, Ferrari is not generally given to rash decisions.

"We have tested the new car a lot and it has made a good impression on us. Still, we expect another tough battle in Bahrain," said Michael Schumacher, who won last year's inaugural race. "The first two negative results have stimulated us even more. We are all motivated and primed to go. We will, little by little, be working our way back to the top; have no fear of that."

Bahrain's 5.4 km Sakhir circuit has an impressive start/finish straight of one kilometre but the 15 turns of the track, combined with the high temperature, make it hard on brakes. The was some concern about sand last year; it proved to be less of a problem than expected but finer air filters on the engines will be used to provide protection from wind-blown sand without reducing the air flow.

"As the circuit is surrounded by desert sand on the track makes it slippery off and sometimes even on the racing line," said Mercedes motorsport director Norbert Haug of the conditions. "The heat to be expected in Bahrain could make cooling an issue like in Malaysia. With more than 65 percent the full throttle percentage per lap is above the average of the other circuits on the calendar."

The Renault drivers are confident they can maintain the team's front-of -the-grid status this weekend and while technical director Bob Bell is pleased with the progress, he's cautious about the performance of rivals. "Our success in the opening races has obviously increased the weight of expectation, but we are taking nothing for granted at all," he commented. 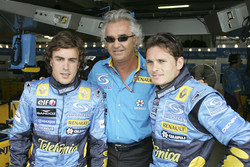 "As soon as McLaren put together an incident-free race weekend, I still believe they will be our main opposition among the Michelin teams. Ferrari had tyre problems in Malaysia, but that is no reason to write them off -- and there is still the new car to come at this race."

Toyota has not been a team that the front runners have seriously considered as competition in past seasons but that opinion may have to change. In Malaysia the Cologne-based squad scored its first ever podium finish with Jarno Trulli's second place and Ralf Schumacher was also in the points. A one-off fluke or is Toyota finding its feet?

Trulli is optimistic but realistic: "Following the tremendous success we achieved in Malaysia two weeks ago, we head to Bahrain with considerably raised expectations," said the Italian. "It is hard to know whether we will be able to replicate our competitiveness from Sepang in Bahrain, but we will certainly try our best."

Williams took its first podium finish of 2005 at Sepang and Nick Heidfeld's third place made a few people sit up and take notice of the quiet German. "I feel very confident after my podium in Malaysia, so I am looking forward to the next race in Bahrain," said Heidfeld.

Red Bull surprised many with its continuing pace in Malaysia. It proved Melbourne was no flash in the pan but can the team keep up the momentum in Bahrain? David Coulthard and Christian Klien will be aiming for their third consecutive finish with both of them in the points.

"In Bahrain we will be aiming to continue our good form from Australia and Malaysia and our target is to complete a hat-trick of points scoring races," said Red Bull sporting director Christian Horner. "Malaysia proved the Australian result was no fluke and we demonstrated that our results have been obtained on merit."

Juan Pablo Montoya is being a rather quiet so far; his fourth place for McLaren in Malaysia was a good effort but almost unnoticeable. Kimi Raikkonen continued to have a turbulent time; an unexpected puncture put paid to his chance of any points last time out but he set the fastest lap of the race, so the car is not lacking in speed. 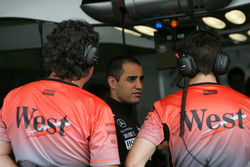 McLaren has confirmed that Montoya will have to sit out Bahrain due to a shoulder injury he suffered while playing tennis last weekend. Test driver Pedro de la Rosa will take over the race seat while Alex Wurz will drive the third car in the Friday practice sessions. Montoya is expected to be fit for Imola.

As for the teams that have yet to score points so far, Sauber has shown potential but the results are stubbornly refusing to come. Felipe Massa has finished both races but Jacques Villeneuve didn't help his cause by ending up in a gravel trap at Sepang. Bahrain will mark Sauber's 200th Grand Prix and it is Villeneuve's first visit to the circuit.

"Bahrain is a new track for me," said the Canadian. "I haven't seen it but I know that it's dry, sunny and sandy so visually it must be very interesting. Talking with other drivers, they say that the track is fun to drive but I didn't see the race on TV last year so I don't really know what to expect."

Jordan has got both drivers to the finish line in both races but while it shows reliability, the yellow cars simply aren't competitive enough. Minardi soldiers on doing Minardi things and BAR… Well, perhaps it's better to not say anything at all, except that Takuma Sato will make his return in Bahrain after being sidelined in Malaysia due to illness.

At the moment the hierarchy in F1 has a rather different order than was expected but how long will it last? After this race the circus returns to Europe and then there will be several weeks of serious hard work without any long-distance time zones to interfere. But for the immediate future there are still questions to be answered in Bahrain.

Too early for Toyota to win?