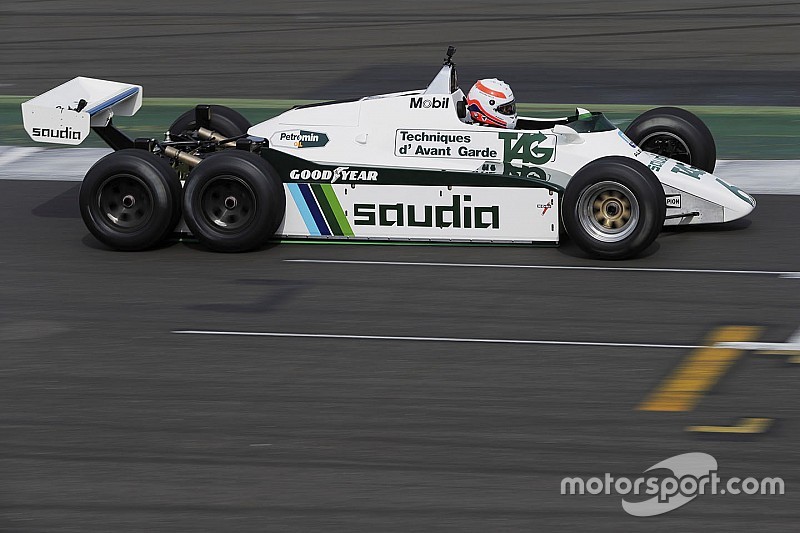 Williams has run a series of its iconic Formula 1 cars in a spectacular event at Silverstone to mark 40 years of the team and preview this year's British Grand Prix.

Tens of thousands of fans claimed free tickets for Friday's event, which was headlined with the running of Nigel Mansell's FW14B, on track for the first time since his 1992 title-winning campaign.

Ex-F1 driver Karun Chandhok, who is the official driver of the Williams Heritage division, was the man charged with completing a handful of laps in the iconic car.

Sir Frank Williams made his first public appearance since he returned home from hospital along with co-founder Sir Patrick Head, who flew in from Sicily.

F1 bosses Sean Bratches and Ross Brawn were also in attendance, with deputy team principal Claire Williams saying they were keen "to experience what teams can do when they want to".

"I'm buzzing, it's been a brilliant day," said Williams. "The highlight has been the fans. It's brilliant to have so many fans here to share our 40th anniversary. I couldn't be prouder.

"We wanted to get the FW14B out, it hasn't run since 1992, it was tricky to, and it's such a complex car anyway. Just the things you don't think about, the people who engineered at the time or who worked on the engine aren't around any more - so it's been a piece of work to make it happen.

"We've had lots of our old drivers here, plus lots of ex-Williams employees here who have made a huge contribution to Williams, so it's fantastic to reunite."

Massa, who drove the iconic six-wheel FW08B, said: "It was good fun to drive. I had a misfire so I had to stop, but it was really nice, a good feeling.

"When you're driving, you don't think you have six wheels, but it looks nice, it's got good grip and even the gearbox was easier than I expected. The number of people here today - it shows how important Williams is for Formula 1. It's nice to be part of this."

Williams plans to run the FW14B and FW08B for parade laps during the British Grand Prix weekend as well as hosting a static display of its iconic cars at Silverstone.