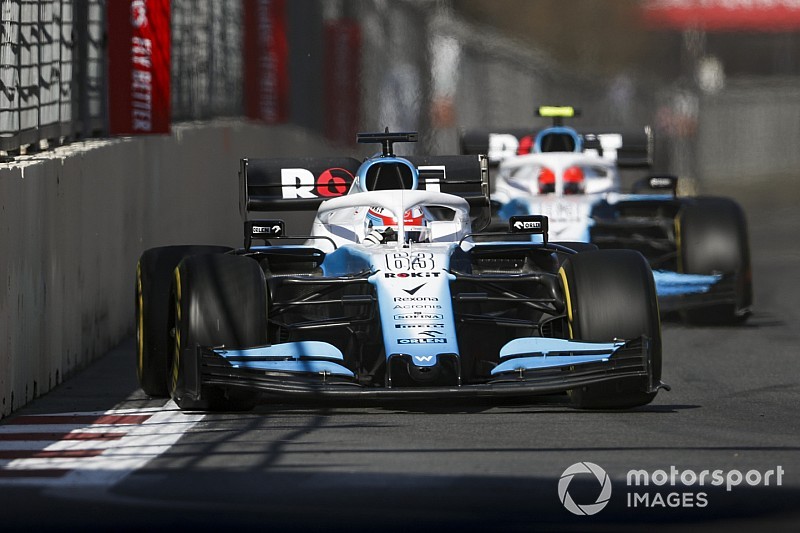 The Williams Formula 1 team is confident it has provided “identical” FW42 chassis to Robert Kubica and George Russell, despite the former's suggestions of different aerodynamic behaviour between the two.

Kubica has trailed his rookie teammate Russell in every qualifying and race of the 2019 campaign so far, but insisted underlying aerodynamic differences between his and Russell's cars have made direct comparisons moot.

“It's clear that we are driving two different cars with the same set-up, so that is something we need to understand,” Kubica said earlier this season. “It's quite obvious on the data.”

When asked by Motorsport.com about the Polish driver's concerns, deputy team principal Claire Williams suggested Kubica had suspected a difference in the the floors on the two FW42s – but said this would no longer be an issue after the component in question was written off in Russell's manhole cover FP1 crash in Baku.

“I know Robert has thought that the floors were slightly different - we haven't been able to clearly demonstrate through scans that we've done that they are, but clearly if a driver is telling you that he believes one is different to the other, we've got to get to the bottom of that, which we're trying to do at the moment,” Williams said.

“But then, the feeling that Robert had around that floor, [it] was the floor that was on George's car during the Baku manhole cover incident anyway, so that's effectively gone.

“The chassis, as far as we're concerned, themselves, they're identical chassis.”

Kubica, for his part, believes the team “finally had an understanding” of the problem that plagued his FW42 earlier in the season.

“Hopefully this will be fixed, and at least it will give me better, let's say, comfort and consistency on the car,” he said.

When asked what the area was in which he sought more consistency from the FW42, he said: “Well, it's a difficult question. As I say, there was an issue with the car which was appearing and not appearing, depending on the corner, depending on the lap.

“So, I would have to tell you 'China, lap one, this corner, then China, lap five, the other corner'.

“You know, I think everyone in the paddock is looking for performance, and to have better driveability, to have a better understanding of the package, of the tyres, of everything. Once you add variation which shouldn't be there, it's not helping.

“In some areas was affecting me more, on some tracks, some others, less, but as I said, I am looking forward to see if we were able to fix it and see how will be the feeling.”

Williams revealed that one area where her team was expecting to see an improvement in Barcelona was the FW42's brake system.

“We have a particular issue with our brake system that we believe we found a solution to, but again, we've got to wait until we run that solution tomorrow, and then we'll understand whether we've resolved that problem,” she said.

“If we can fix that, and then some of the other mechanical issues that we're looking at at the moment, then we'll be in better shape, but clearly the aero programme to deliver performance from an aero perspective is ongoing.”