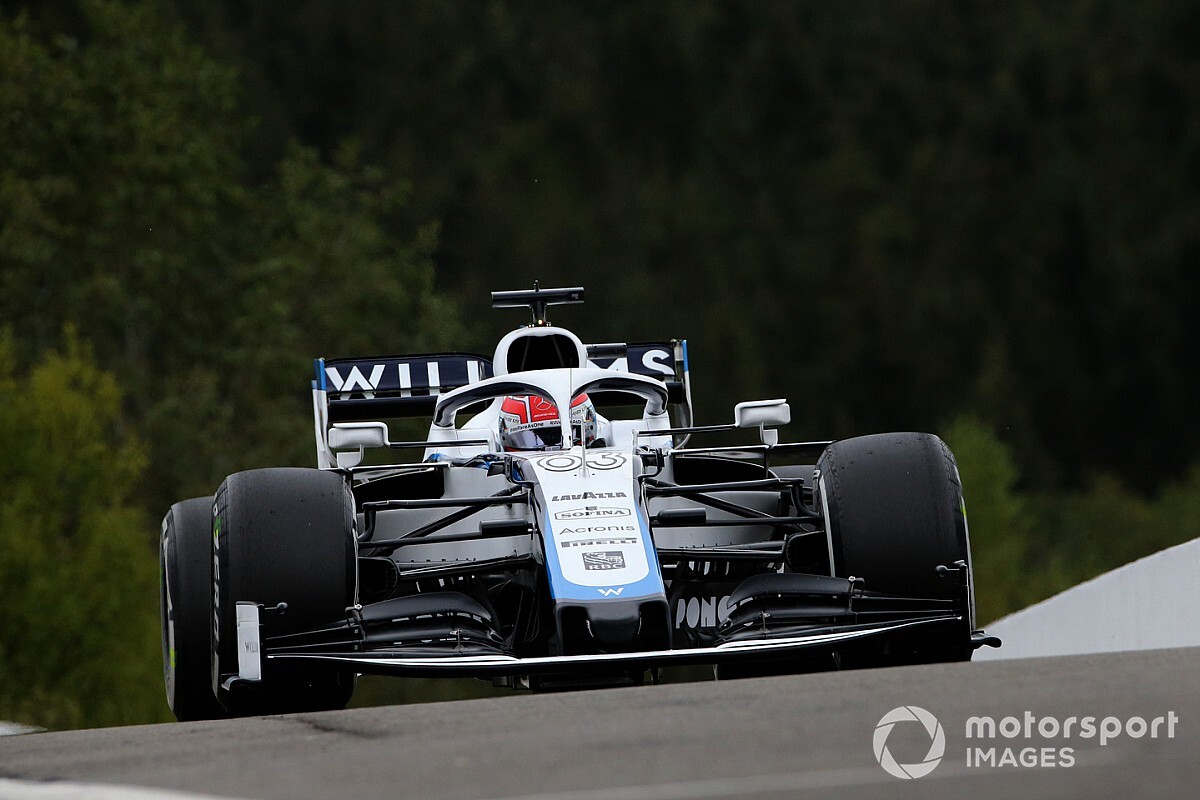 Williams is hopeful it can fight the beleaguered Ferrari squad during Formula 1's 2020 Belgian Grand Prix after George Russell finished just behind Charles Leclerc and Sebastian Vettel in qualifying.

The team's head of vehicle performance, Dave Robson, said Williams was encouraged after Ferrari appeared to show poor form during the long runs in FP2.

Ferrari had both of its cars knocked out in Q2 for the first time in 2020 during qualifying at Spa on Saturday, while Russell reached the middle segment of qualifying for a fifth time this season, ending up 0.207s behind Vettel in P15.

The Italian team was calculated to have the slowest average on the medium tyre long runs in FP2, two places and 0.22s per lap slower than Williams (although Ferrari was 0.324s faster on the un-favoured softs when it comes to race rubber).

"Certainly coming here we definitely didn't expect to be fighting with Ferrari," Robson said when asked by Motorsport.com if Williams had thought it would be fighting the Scuderia in qualifying and if it now felt it could fight the team in the race at Spa.

"It did look like they were struggling a bit yesterday, but even so I think yes we were a bit surprised. As for fighting them tomorrow, I'm hopeful, actually.

"Why not? They didn't look particularly special on high fuel on Friday. So hopefully we can stay with them and battle with them.

"[I] don't think their end of straight speed is particularly brilliant either – a bit like ours. We'll definitely be trying."

Russell celebrated the news he had made it through to Q2 while exclaiming "I was not expecting that - especially after P3" over his team radio.

Robson said his driver was "a bit more surprised than I thought he would [be]".

"He was frustrated coming out of FP3 when his last run was a bit compromised in a lot of traffic, which I think frustrated him – and another 10 or 12 drivers," Robson added.

"So I think it was probably a bit of relief, but he put in a genuinely good lap.

"The engineers did a good job of getting him out at a good time so he could prepare the tyres as he wanted and I think everything just came together really.

"The good thing was the lap in Q2 was pretty much as good, so I don't think it was just a one-off [and] everything coming together in a lucky way.

"Everything came together due to it being well-managed, better than it was at the end of FP3 [where Russell finished 18th]."

Robson also explained that Russell abandoned his first run in Q2 due to a combination of a factors, with the Briton then going on to set a best time in Q2 of 1m43.468s – an improvement of 0.162s compared to his time to escape Q1.

That lap briefly put him ahead of the two Ferrari drivers at the end of Q2, before they improved to take P13 and P14 on the grid.

"It was a scrubbed set of tyres [Russell used on his first Q2 run], so we knew it was going to be a struggle and we'd taken a little bit of engine mode out because it was scrubbed tyres," Robson said.

"And then I think he got caught by a gust of wind at Turn 5 at the end of the Kemmel straight, so he knew he was down and he opted just to save the car and give us a bit more time in the garage for the final run, which was the one that would count."