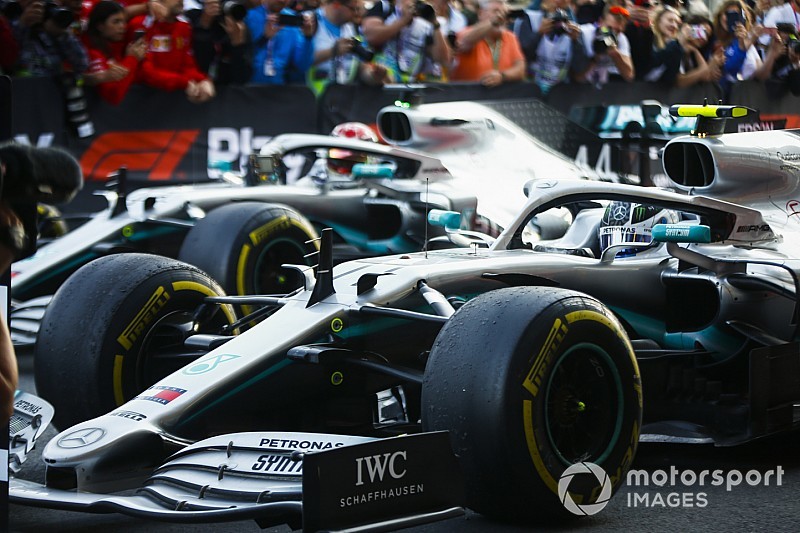 Mercedes Formula 1 team principal Toto Wolff says four one-two finishes at the start of the 2019 season "flatters us”, after making history in the Azerbaijan Grand Prix.

Valtteri Bottas beat teammate Lewis Hamilton in Baku as Mercedes became the first team to finish first and second in the opening four races of a season since the F1 world championship began in 1950.

It was the second time this season that Mercedes has overcome a superior Ferrari team, following its unexpected one-two in Bahrain.

"You can see the fluctuations of performance," said Wolff of the current Mercedes vs Ferrari battle. "Ferrari's performance in Bahrain was in a league of its own. Ours was in Melbourne and in China.

"[In Baku] they were good, us not so much. What I can see is that the overall order doesn't seem to have changed. It's still the same protagonists, but the first four races, the one-twos, flatters us."

The closest any other F1 manufacturer came to scoring a quartet of one-two finishes at the start of a season was in 1952.

Ferraris finished first and second in the first four races contested by that year's F1 championship entrants, although the cars were built to Formula 2 regulations.

The first of those one-twos was also earned through works driver Piero Taruffi and Rudi Fischer, driving a Ferrari entered by Ecurie Espadon.

That run also excludes the Indianapolis 500, which counted towards the world championship but was not contested by F1 teams beyond a sole Ferrari entered for Alberto Ascari.

In Baku, Mercedes had identified Ferrari as a clear favourite following Charles Leclerc's control of practice, but Wolff insisted the team was not "talking ourselves down".

"We see a strong Ferrari on Friday and Saturday, and I still believe that Charles was probably the fastest man on track, but like in Bahrain it didn't come together," he said.

"You can say now 'Stop saying these things, it's the fourth one-two in a row'. But it is still very much our mindset, we still believe that there are so many things which we need to understand better and improve.

"What we did in the first races was actually put all things together. The team didn't do any mistakes, the strategy calls were right, the drivers didn't put a foot wrong. That made us win the first four races. When you look at the other side, they had more problems."

Debate: Can Bottas stay in the championship hunt?