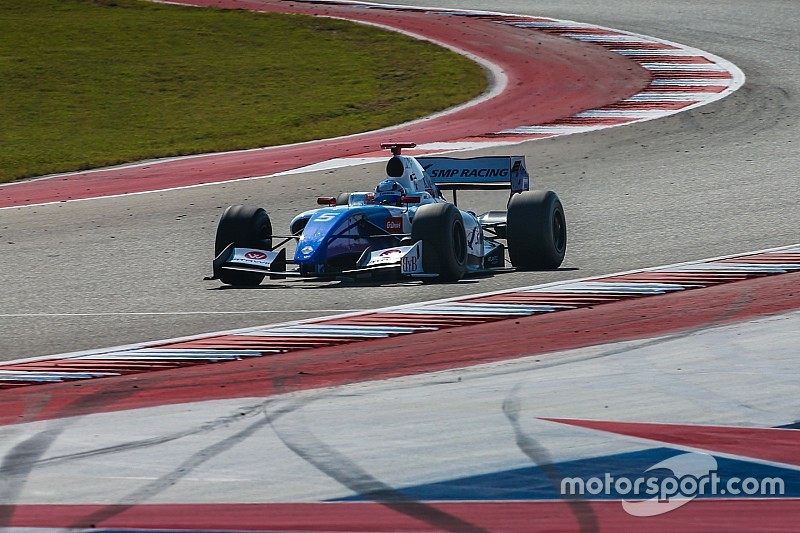 Egor Orudzhev played pit strategy to perfection to win the second Formula V8 3.5 race of the weekend in Austin, as championship contenders Pietro Fittipaldi and Matevos Isaakyan both faced issues.

Orudzhev was on the offensive from the start as he went around the outside of Fittipaldi at turn one to slot into second place and then put pressure on polesitter Alex Palou.

The Teo Martin Motorsport driver kept his lead during the opening stages of the 40-minute race with Orudzhev happy to wait for an opportunity to pass Palou rather than pushing his tyres too hard.

Fittipaldi, who came into the second race with an 18-point lead in the championship, tried to keep the pressure on Orudzhev in the early running but he suffered a brake problem going into Turn 1, ran through the gravel and hit the barrier.

At the front of the field, Palou pitted with 27 minutes remaining but Orudzhev waited until the halfway mark to make his own mandatory stop and his quicker in-lap allowed him to come out 0.1s ahead.

The Spaniard tried to pressure Orudzhev into making a mistake but he did not put a foot wrong and started to build a gap, which he extended to 5.4s by the chequered flag.

Behind the lead pair, Diego Menchaca claimed his first podium of the season after a great drive from the Mexican, whose car had an engine change overnight after being down on power in race one.

Menchaca was behind championship contender Isaakyan going into the final 10 minutes, but a great outbraking move at the end of the back straight gave him third place.

The race got worse for Isaakyan, who was looking to take advantage of Fittipaldi’s retirement to close the gap in the championship, as he outbraked himself at Turn 12 on the penultimate lap and allowed Roy Nissany to move up to fourth.

Isaakyan then tangled with Konstantin Tereschenko and fell to sixth, with Alfonso Celis moving up to fifth.

Tereschenko, who damaged his car in the incident, fell to seventh with Yu Kanamaru finishing eighth.

Giuseppe Cipriani was ninth with race one winner Rene Binder finishing a lap down after his engine stalled as the grid set off on the formation lap.

With one weekend and two races to go, Fittipaldi leads the championship by 10 points over Isaakyan.

The Austrian Grand Prix as it happened