Carlos Sainz Jr (DAMS) becomes the first Spanish driver to win in the Formula Renault 3.5 Series at the Motorland Aragón circuit. After taking the pole, the member of the Red Bull Junior Team went on for a green to chequers victory ahead of Nikolay Martsenko (Comtec Racing), followed by Oliver Rowland (Fortec Motorsports), the top rookie finisher on the day. The Spaniard now sits alone atop the general classification. 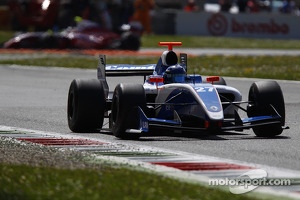 The Comtec Racing driver put in an excellent start, which allowed him to threaten Carlos Sainz Jr at the first corner, but the Spaniard held on to the lead. Zoël Amberg moved up to third place ahead of Oliver Rowland, Marlon Stöckinger (Lotus) and Roberto Merhi. In contrast, Matias Laine (Strakka Racing) had to return to the pits to change the front wing, while William Buller (Arden Motorsport) and Oliver Webb (Pons Racing) retired.

In stringing together one fastest lap after another, Carlos Sainz Jr pulled away from the field. Back in the chase group, Matthieu Vaxiviere (Lotus), 13th in qualifying, passed several cars, including those of Pietro Fantin (International Draco Racing) and Sergey Sirotkin (Fortec Motorsports) to move into seventh place. On lap 13, Oliver Rowland got past Zoël Amberg. Marlon Stöckinger made the most of the situation to get around the Swiss driver.

Carlos Sainz Jr went on for the win with a more than 14-second margin of victory from Nikolay Martsenko. Top rookie, Oliver Rowland made his first trip to the podium in the category ahead of Marlon Stöckinger. Zoël Amberg held on for fifth place ahead Roberto Merhi and Matthieu Vaxiviere. Sergey Sirotkin, Pierre Gasly and Pietro Fantin complete the top ten.

Carlos Sainz Jr: ”It is an incredible feeling to win at home, with all my compatriots who support me. It is a huge achievement. After a delicate start, where I honestly thought I would lose a few spots, I didn’t expect the gap to increase so quickly, in as much as qualifying was very close!”

Nikolay Martsenko: ”My good start was probably due to the fact that I was the only car at the front of the grid that had a high-downforce configuration. I managed to overtake Oliver before having a good battle with Carlos at the first corner. Then, he pulled away, so I made the most of it to assure this first podium finish.”

Oliver Rowland: ”My start was a little difficult, in as much as I had already messed up at Monza. The race pace was good, but it is so hard to overtake on this track. We now need to work to improve and do better tomorrow.”

(*) Subject to confirmation of the results following the technical and sporting verifications.

AVF cruises to the top-5 in Race 1 at Alcaniz