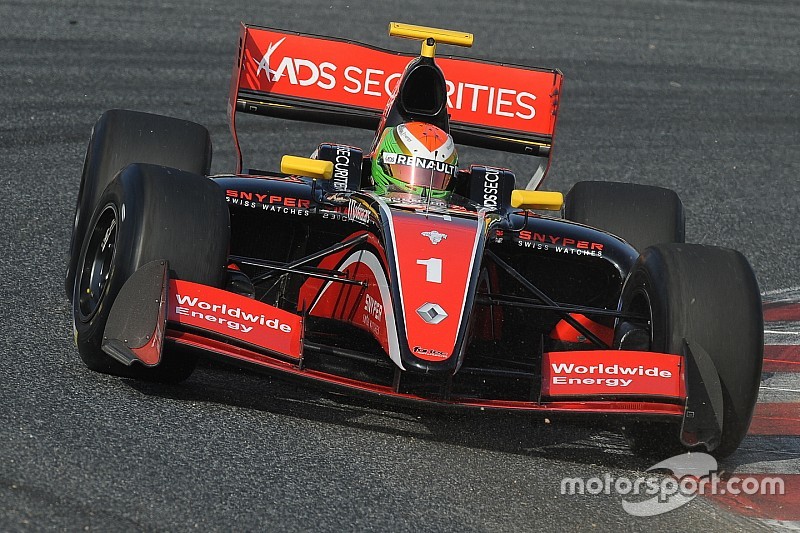 Egor Orudzhev produced a masterful performance to dominate Race 1 of the Formula V8 3.5 Barcelona finale, only for a late Louis Deletraz overtake to eliminate him from the title battle.

Arden driver Orudzhev's victory was his third in the last four races, and his second straight win from fifth on the grid.

However, Deletraz's late-race move on main rival Tom Dillmann for second not only allowed the Renault junior to extend his points lead, but also left Dillmann as his only remaining challenger, with Orudzhev narrowly dropping out of contention.

The key to the Russian's comfortable race win was again the start, which had been delayed for an extra formation lap as Jack Aitken stalled in the third grid slot.

When the race got going for good, poleman Dillmann looked to have managed a reasonable getaway – but Orudzhev stormed past, diving down the inside at Turn 1 and taking the lead.

Once in first, the Russian rapidly built an advantage of more than a second over Dillmann – and while the Frenchman managed to keep pace for the opening few laps, he soon started dropping back.

By the halfway point of the race, Orudzhev had escaped into the distance, and Dillmann's full attention switched to main rival Deletraz, who had stayed in fourth after the start but soon cleared a struggling Matthieu Vaxiviere for third.

Having closed in on Dillmann, Deletraz tried to take the outside line into Turn 1 but could not get close enough to the Frenchman to mount a serious challenge – and, for the next few laps, the Swiss driver would hang back within a second of his rival, seemingly plotting his next move.

And the move was finally set up on lap 18, Deletraz following Dillmann close in the final sector and managing to get a solid enough run out of the last turn.

Dillmann defended, taking the inside line, but as Deletraz drew level with a dive to the outside, the Frenchman locked up, running wide at Turn 1 and giving up second to Deletraz as he rejoined.

From that point on, it was a smooth drive to second for Deletraz, the Renault junior finishing 10 seconds adrift of Orudzhev to allow himself a six-point lead over Dillmann ahead of Sunday's decider.

Dillmann himself completed the podium a second up on Aurelien Panis, who, along with Orudzhev, was among the five drivers eliminated from title contention by the outcome of Race 1.

Other drivers to drop out of the title battle were Roy Nissany, who finished only ninth, Rene Binder, who retired early on, and Vaxiviere, who called it a day 15 laps in after experiencing a massive pace drop-off.

Heading into Sunday's finale, Dillmann needs to outscore Deletraz by six points or more as he cannot win the title on countback.