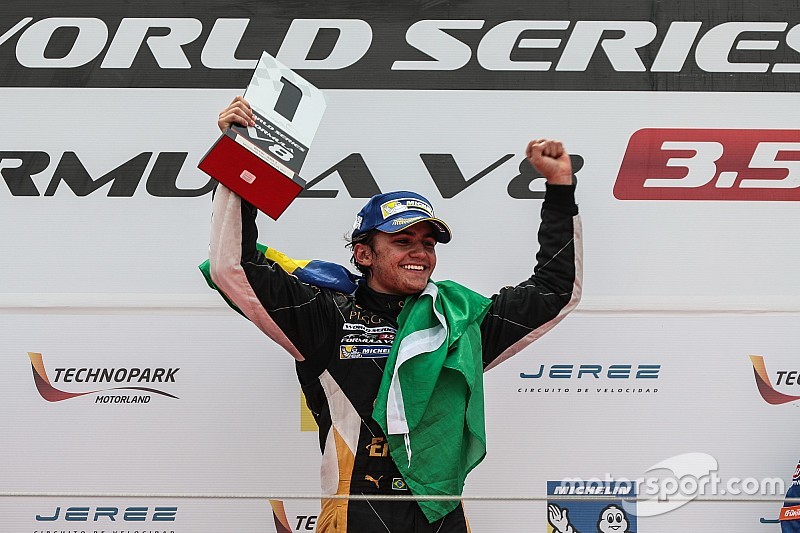 In his latest Motorsport.com column, Pietro Fittipaldi admits he is relieved to be back at the top of the standings in Formula V8 3.5, despite another up-and-down outing in Aragon.

While we're back into the championship lead, the Aragon weekend wasn't exactly a great one. I was happy to score the two poles and our pace was great, but the Saturday race problems made it an average round in the end.

I was told that I am now tied on poles in 3.5 with Daniel Ricciardo and Kevin Magnussen, which is pretty cool. But at the end of the day, poles don't give you points.

I think we've been quickest all year and we could've had a much bigger gap in the championship. Right now it's only 14 points and there's still a long way to go, so we have to really start capitalising on the pole positions. 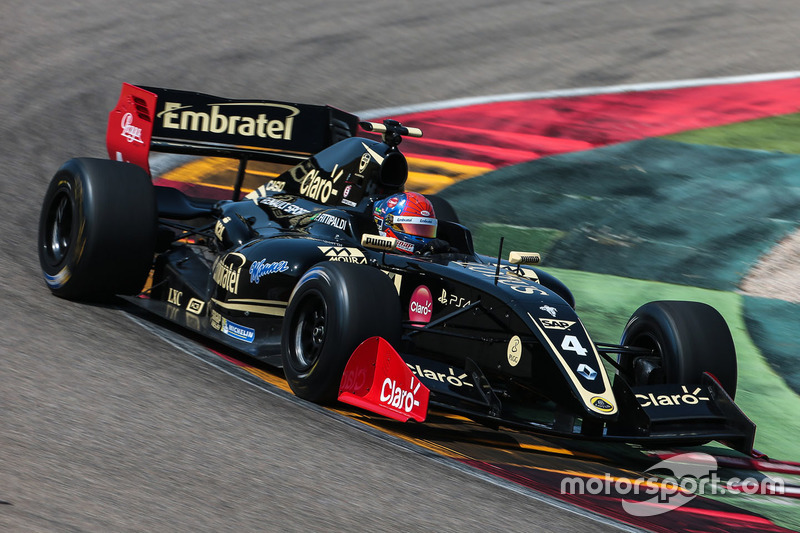 I knew from practice we were good on pace because on used tyres then we were doing similar times to guys who opted to run new tyres. And on Saturday morning in the first pole shoot-out I was able to smash in a really good lap, put all my sectors together. We were quicker than everybody by a lot, something like seven tenths.

There was a bit of late confusion as my car had an issue after the chequered flag, so I stopped on track. I managed to get it restarted but got a penalty, with my fastest laptime deleted. Still, my second-best time was also good enough for pole, although not by much.

The Saturday race, unfortunately, was hindered by another problem at the start. We had good starts in Jerez, but here a clutch issue reared its head in practice and the clutch bite point changed quite a bit for the race.

It would be fixed for the second race, and I don't want to blame anyone or talk too much about starts. I'm sure that particular area will be good for the rest of the season.

After the start issue on Saturday, it was just a matter of keeping calm as well because the pace was there – and even with a top-five finish, it'd still be enough points.

I was sure we'd be a lot quicker than everyone else and we would start picking people off one by one. I tried to make a move on Konstantin Tereshchenko, who was in front of me and going pretty slow after he was blocked.

I went to the inside and he didn't see me - he told stewards afterwards that he was looking at the driver to his outside. I had almost my full car down the inside, and he turned, I had to turn as well. And unfortunately I had to go to the grass and I couldn't save it. 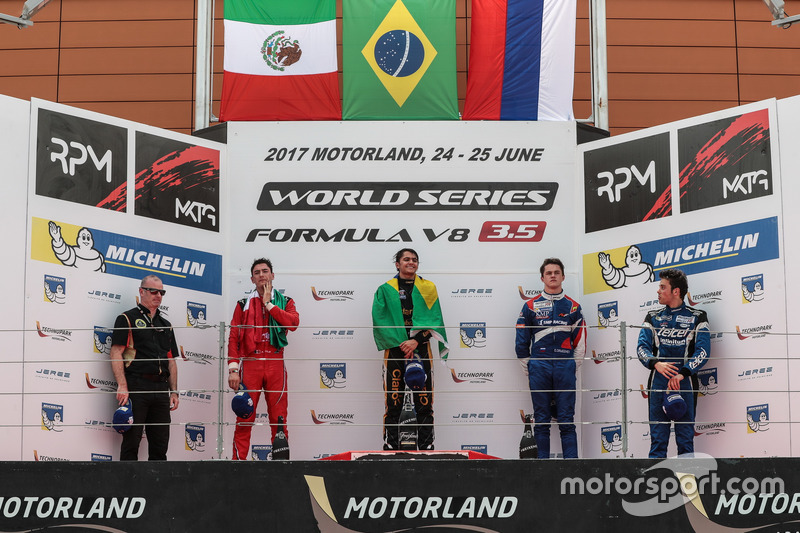 Usually, how your Saturday race goes sets the mood for Sunday, so I really had to reset myself and treat the second race day like a brand-new weekend.

It was the day of my 21st birthday, too, although if I'm being honest, I'd forgotten all about it before the start of the weekend. Even on the day itself it didn't really pass through my mind until the race was over and I could relax.

I took another pole in the morning, but the gap was a bit smaller, it was around one and a half tenths as I made a couple of mistakes. Then I got a really good start in the race and managed it from there.

I opened around a four-second lead before my pitstop, but after I pitted I had traffic for a couple of laps, which about halved my advantage.

The gap stayed around there but to be honest I was just controlling it. Aragon is a really windy track, and this affects a lot of the braking zones massively - so you can turn into a corner and get a massive gust of wind, and there's a massive snap of oversteer and you nearly lose the car.

So I was really just about managing it. It doesn't make a difference if I win by 10 seconds or one second, I just wanted to get the points - and I did. 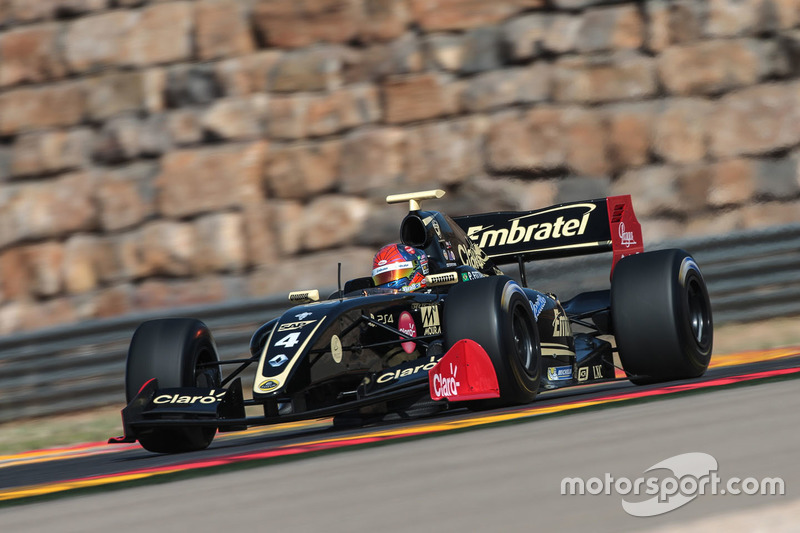 It is a relief to be leading the championship again, because after all those races where I had pole but couldn't get the points, I felt a bit annoyed not to be at the top of the standings.

I think we really deserve to be ahead and now we have to be really focused on opening the gap - repeating the qualifying performances we've been doing, getting the starts and getting the wins.

There's a lot of other drivers within striking distance of the points lead, so it's added pressure because you're racing everyone for the championship. So it'll be important to get every win.

There's also a bit of extra pressure because next up is the Nurburgring, the last familiar venue for the series before we go to Austin, Mexico and Bahrain.

I'm sure we'll be fast, it's just a matter of staying calm, doing our job, improving and going step by step. 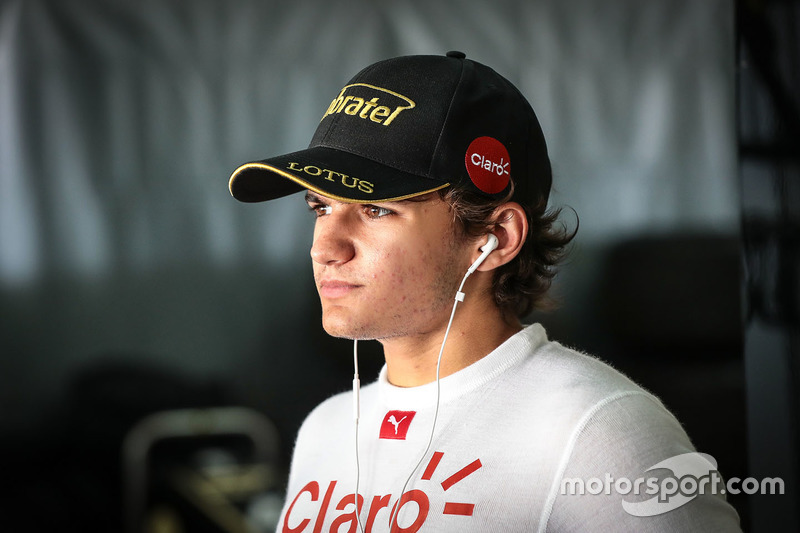