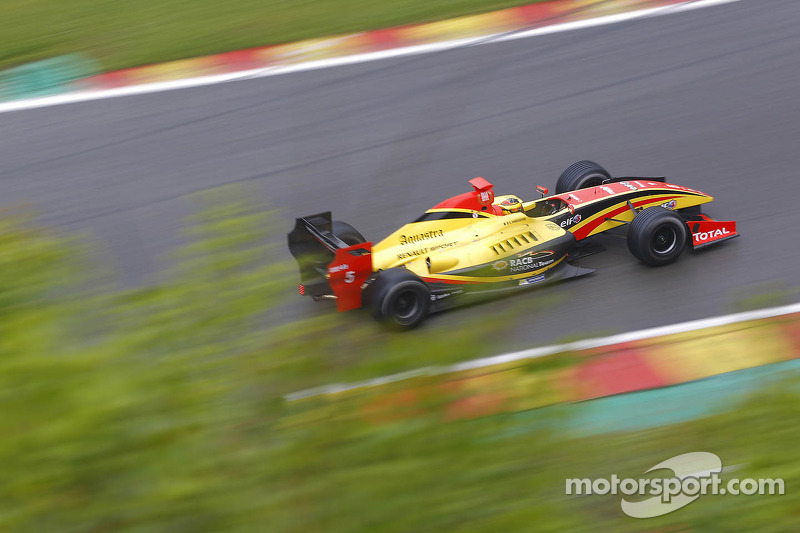 Second victory of the 2013 Formula Renault 3.5 Series (WSR) for Stoffel Vandoorne; this time at his home race in Belgium. However with his third place on the podium today, Kevin Magnussen still retains the points lead.

Already a winner at Monza, Stoffel Vandoorne (Fortec Motorsports) recorded his second victory of the year in front of his own fans at Spa-Francorchamps. Second on the podium was Will Stevens (P1 by Strakka Racing), with championship leader Kevin Magnussen (DAMS) third. The Dane’s advantage over the Belgian in the standings is now down to 32 points.

Revelling in the morning sunshine, Kevin Magnussen chalked up yet another pole position at Spa-Francorchamps, while Nico Müller (International Draco Racing) qualified alongside him at the head of the grid and Stoffel Vandoorne (Fortec Motorsport) and Nigel Melker (Tech 1 Racing) claimed the two slots on the second row.

When the lights went out Kevin Magnussen saw Nico Müller glide by him and into the lead, the Dane losing a further place when Stoffel Vandoorne dived past both him and Will Stevens (P1 by Strakka Racing) on the descent to Raidillon. The Belgian then jumped into the lead at Les Combes.

Running third after the restart, Kevin Magnussen ducked into the pits on lap five, with race leader Stoffel Vandoorne changing his Michelin tyres two laps later, allowing Will Stevens and Marlon Stockinger (Lotus) to take the provisional lead. Vandoorne was back in front as soon as everyone had pitted, however, and led the way from Magnussen, Stevens, Da Costa and Müller. On the penultimate lap Stevens snatched P2 from the Dane, while Carlos Sainz Jr (Zeta Corse) and Jazeman Jaafar (Carlin) came together.

Stoffel Vandoorne: “After yesterday I had to go and score big. I made a great start and got a tow, which allowed me to take the lead on the first lap. I attacked as much as possible to protect my lead, and it’s brilliant to win at home.”

Will Stevens: “After a blank day yesterday the aim was to get back in the points again. We had some really good pace throughout the race, and this is a good result for the team and I.”

Kevin Magnussen: “I couldn’t have done much better this time. The pit stop was the key moment and the podium finish at least means I keep my championship lead, which is good.”

I.R.S. and Zanella just shy of the top ten in Spa-Francorchamps Race 1

World Series by Renault scores another big success at Spa