Kevin Magnussen and DAMS do the job in Monaco

The DAMS team leaves Monaco on a high note. Next race at Spa!

Finally, DAMS enjoyed a pretty good weekend on the Monaco roller-coaster. Although the French squad didn't clinch victory it consolidated its lead in both the drivers' and teams' championships. Kevin Magnussen finished in a solid fourth place and he is now 14 points in front of Stoffel Vandoorne in the drivers' ratings. Norman Nato was unlucky enough to suffer a technical problem on his car, but his overall level of performance gives him high hopes for the future. 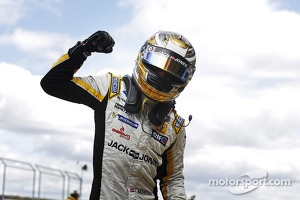 Due to the specific Monaco layout the cars were split up into two groups for qualifying. Overall, things went well for the DAMS drivers with Magnussen clinching fourth place and Nato seventh. Given that it is virtually impossible to overtake in the Principality these positions should have more or less corresponded to those at the finish. It was the case for Magnussen. The Dane lost a place at the start which he clawed back later on in the race after Carlos Sainz Jr made a mistake. Above all, towards the end of the race he fought off the attacks of Antonio Felix da Costa, one of his main rivals for the title, who put him under a lot of pressure, and bagged the 12 points that went with fourth. Nato's race was ruined at the start when his engine overheated and triggered the safeguard mode. He finally retired with two-thirds of the race gone after a contact. Nonetheless, he made a strong impression on his maiden outing in Monaco with his performance and times in both free practice and qualifying.

François Sicard, Managing Director: "Congratulations to the team who did a great job. We've increased our lead in both championships after one of the most difficult rounds on the calendar: it bodes well for the future. Kevin's race reflected his image: he was quick, consistent and very solid under pressure. I'd also like to underline Norman's good Monaco debut. In free practice, qualifying and in the race he set times that say a lot about his ultimate potential. We're heading for Spa next weekend in a confident frame of mind."

Kevin Magnussen: "A big thanks to the team who again gave me a great car. I wasn't able to fight for victory but the important thing was to stay in front of my rivals in the championship. And that's what I managed to do. There's no time to rest on our laurels and we have to continue in the same vein next weekend and aim for victory again."

Norman Nato: "On my first Monaco outing I had a pretty hectic weekend! Once again I have mitigated feelings. On the one hand I have the speed as I showed in practice and qualifying even if I was hoping to do better. But on the other, I'm very frustrated with the problem at the start. This being said it's motor racing and things can go wrong on the mechanical side from time to time. Now, I can't wait to tackle another legendary track, Spa-Francorchamps."

Spa-Francorchamps: No place for the faint-hearted