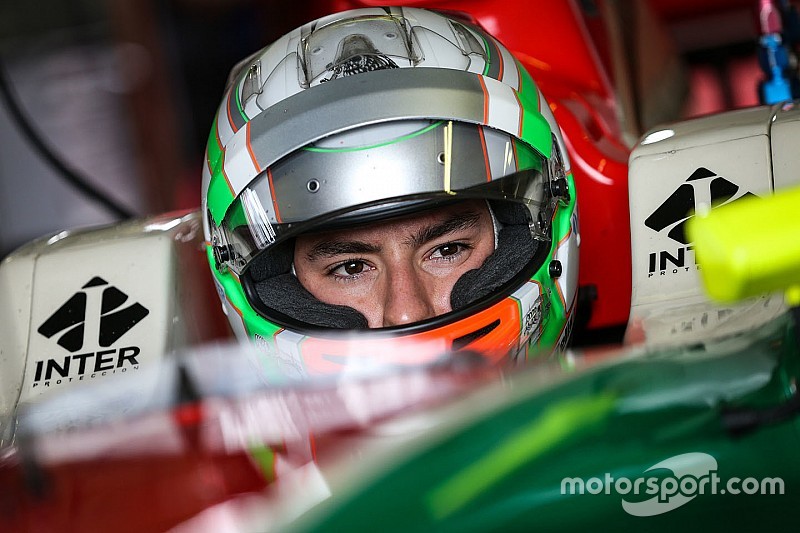 Alfonso Celis took a lights-to-flag win in the first Formula V8 3.5 race at Spa-Francorchamps, securing his maiden win in the championship.

Celis had a good launch off the line from pole, unlike fellow front-row starter Pietro Fittipaldi, who bogged down and dropped to last.

That promoted the Brazilian's Lotus teammate Rene Binder to second, but the Austrian was immediately under pressure from Roy Nissany.

Celis on the other hand quickly pulled away from the rest, and led by five seconds at the end of the fourth lap.

By that time, Nissany and Egor Orudzhev had both overtaken Binder for second and third respectively.

Nissany matched Celis' pace, maintaining a gap of over four seconds until the very end of the race, when the RP driver rapidly started to close in.

However, Celis held on to take the win with 2.9s of his advantage left.

Orudzhev on the other hand consistently lost time to the top two, and crossed the line 21 seconds behind. The Russian made it to the podium from 10th on the grid.

Binder held on to fourth for the majority of the race, but was eventually demoted by Diego Menchaca.

He was then attacked by Yu Kanamaru, and the Japanese driver could also get by, meaning Binder had to settle for sixth.

RP's Damiano Fioravanti was close behind in seventh, while Fittipaldi took eighth, beating the Teo Martin Motorsport duo of Nelson Mason and Konstantin Tereshchenko to the spot.

Mason was running sixth early in the race, but ran wide at Les Combes on Lap 6.

The two retirements of the race were Matevos Isaakyan, whose car stopped on the opening lap, and Giuseppe Cipriani, who spun and pulled into the pits.