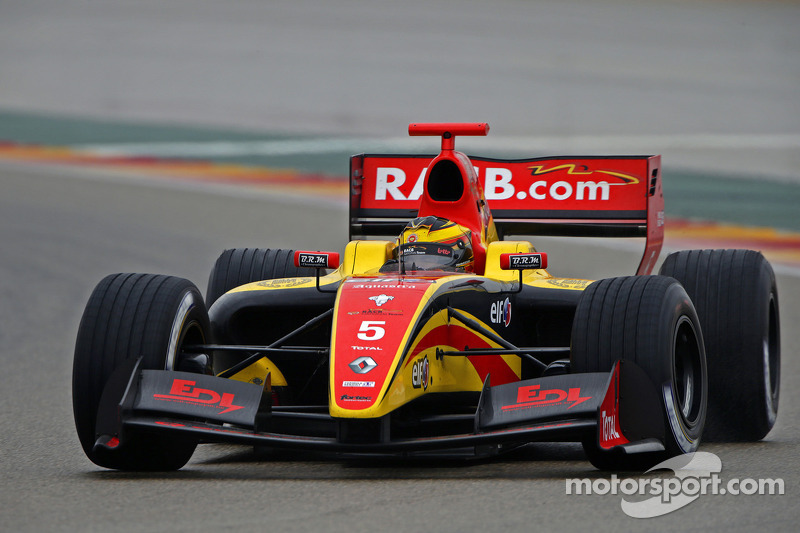 The Belgian won from Antonio Félix da Costa and Nigel Melker, with championship leader Kevin Magnussen failing to finish in the points.

Stoffel Vandoorne (Fortec Motorsports) led from pole to the chequered flag at Moscow Raceway to secure his third victory of the season. The Belgian won from Antonio Félix da Costa (Arden Caterham) and Nigel Melker (Tech 1 Racing), with championship leader Kevin Magnussen (DAMS) failing to finish in the points.

In qualifying at Moscow Raceway this morning, Stoffel Vandoorne went fastest to claim his second pole position of 2013. The Belgian was joined by Antonio Felix da Costa on the front row of the grid. Kevin Magnussen initially qualified third, but had his two best laps deleted after being found to have blocked two of his opponents. The Dane, then, started the race in 17th.

Sergey Sirotkin (ISR) stalled at the end of the formation lap, and the clouds thickened as the drivers lined up on the starting grid. After the lights went out, Stoffel Vandoorne held off the challenge of Antonio Félix da Costa. The pair then took advantage of the compact chasing pack, led by Nigel Melker, to gradually pull away.

The gap between Stoffel Vandoorne and Antonio Félix da Costa grew as the laps went by. Behind them, meanwhile, some thrilling battles developed, with Nigel Melker, third, and Will Stevens (P1 by Strakka Racing) both passing William Buller (Zeta Corse) on lap seven.

There were intense duels throughout the field. On lap 20, Mikhail Aleshin (Tech 1 Racing) fought well to defend 18th place from the SMP Racing by Comtec pair of Daniil Move and Lucas Foresti. And a lap later, Foresti collided with Nikolay Martsenko (Pons Racing).

Stoffel Vandoorne eventually took the win, and was joined on the podium by Antonio Félix da Costa and Nigel Melker. Will Stevens, William Buller and the International Draco Racing pair of André Negrão and Nico Müller followed them over the line. Marlon Stockinger (Lotus), Oliver Webb (Fortec Motorsports) and Marco Sorensen (Lotus) also finished in the points, while Kevin Magnussen placed outside of the top ten for the first time this season.

Stoffel Vandoorne: "We had a tough time of it yesterday, and we made some bad choices. But the team’s work from last night has paid off. My confidence came back in qualifying. I started the race well, which allowed me to build a small lead. I then capitalised on it, and I’m very happy to have won."

Antonio Felix da Costa: "We had a good day yesterday. I put in a good qualifying time, but pole position is key on this circuit. The team and I need to do a bit better if we’re to get a victory. Second place is a good result, though, as I was driving with a damaged exhaust."

Nigel Melker: "At Spa, we managed to get on the podium. Here we’ve picked up from where we left off, and we can see we’re progressing with every meeting. This was my first race at Moscow Raceway and it’s an encouraging result, despite my small mistake at the start."