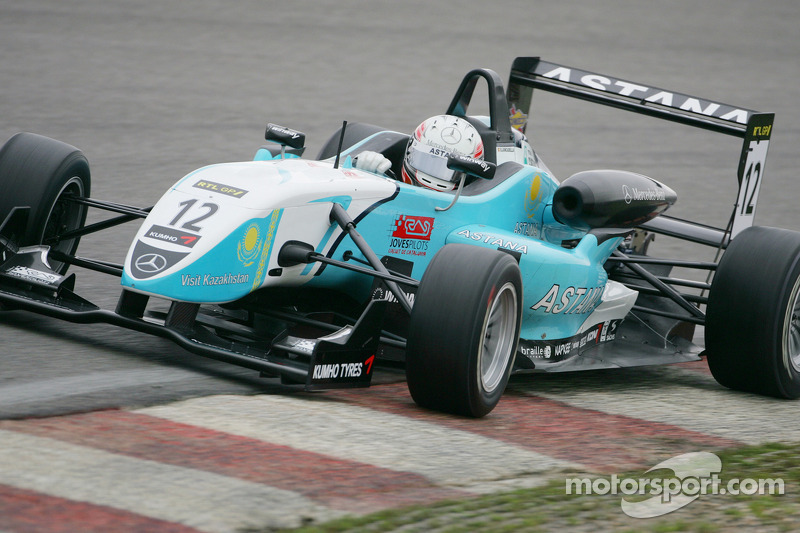 The Macau Grand Prix is often the source of major carnage and today was no real exception with Daniel Juncadella (Prema Powerteam) coming through to head the survivors home to victory in a race plagued with Safety Car periods. Second behind the unexpected Spaniard (everyone had expected Roberto Merhi to win) was Felipe Nasr (Carlin), the Brazilian remaining apparently unflappable despite the mayhem occurring all around him. Third place went to Marco Wittmann (Signature), deeply disappointed with that after an early lead was lost during the second restart.

Even before the start things were not as normal, with Hironobu Yasuda (Three Bond Racing) pulling into the pits rather than going to the grid. However it was when the start lights went out that things got really messy. On row 2 Merhi (Prema Powerteam) stalled and was left stranded as the rest of the pack charged towards him. The resulting crash took out Laurens Vanthoor (Signature), Richie Stanaway (van Amersfoort Racing) and Daniel Abt (Signature), all with seriously damaged cars. Merhi himself continued round with nothing left of the rear wing bar a single strut before stopping on lap 2. 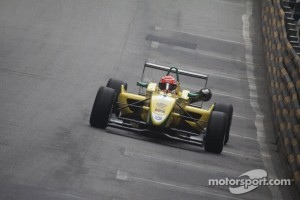 Into the bargain Kimiya Sato (Motopark) clashed with Carlos Huertas (Carlin), and the two of them plus Marko Asmer (Double R Racing) all did a little dance in the escape road as they tried to disentangle themselves. The upshot was that the Safety Car had to be scrambled as the marshals attempted to remove the wreckage from the start/finish line. It picked up the field promptly and led them through the pit lane while the hordes of people in there dived for cover in all directions. Sato took the opportunity to have a new front wing fitted while he was in there, effectively dropping to last but one ahead of his victim Huertas.

After a handful of laps the race went live again and Bottas made a play for the lead that started at the first bend and continued all the way to Lisboa. To his credit Wittmann didn’t flinch and came out ahead, while at the back an aggravated Huertas put in the first fastest lap of the race. It all went pear-shaped for Bottas though when he made a mistake at Sao Francisco and clouted the barriers, sustaining damage that scuppered his chances of winning this blue riband event at the third attempt. Instead he was out of the race with 11 laps left. 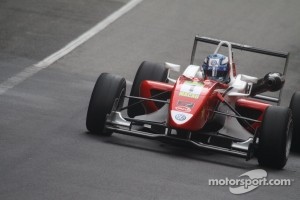 By R Bend Nasr was through to 2nd, and rapidly thereafter Juncadella also went through, before launching an attack on Nasr that promoted him to 2nd. Further back Munoz was on the move and was up to 18th, but he still had a lot of work to do. Magnussen was also on the move as he had threatened. Carrying on a possibly unfortunate family tradition, he was trying to recover from an awful grid position and was flying now. 10th was a decent reward and he clearly wasn’t intending to stop with that.

Ahead of him it was getting interesting as Yamauchi, Sekiguchi and van Asseldonk slugged it out for 4th, while Buller, Foresti, and Lloyd were Magnussen’s next targets. Lloyd was despatched a lap later at much the same time as Yamauchi lost out to Sekiguchi and van Asseldonk. Sims was another on the move having started from the back; he was now 17th. At the front though, it was all about Wittmann as the German opened up an ever larger gap despite Juncadella’s best efforts. It looked like the Signature driver was simply going to waltz off into the distance unless something unexpected happened.

As this is Macau, something did happen. To be precise Rosenqvist went off in the mountain section, leaving bits of front wing everywhere and ending up parked against the barriers. Lo and behold the Safety Car had to be scrambled yet again while the unfortunate Swede was dragged away to safety. The order now as they all settled in to patiently bide their time was still Wittmann in the lead from Juncadella, Nasr, Sekiguchi, van Asseldonk, Yamauchi, Buller (with a great big gouge out of the nose of his car), Foresti, Magnussen and Lloyd. 11th was Asmer, from Sainz, Jaafar, da Costa, Bradley, Munoz, Sims, Fong, Fantin and Sato. A somewhat distant 21st was Huertas. Almost unnoticed, Evans had pulled into the pits with brake problems and was out of the race. The remaining survivors followed the Safety Car round for the next three laps.

Finally on lap 9 the race restarted. This time Wittmann got it all wrong and the trio behind him all slipstreamed past him on the run to Lisboa, Juncadella snatching the lead, while Sekiguchi barged past Nasr, pushing the Brazilian down to 3rd. Van Asseldonk then demoted Wittmann to 6th, which was not what anyone had expected. It might have been safer back there though as ahead if him Nasr and Sekiguchi banged wheels when Nasr had the temerity to try and reclaim 2nd. Sekiguchi tried to resist but Nasr was equally forceful and was through into 2nd. 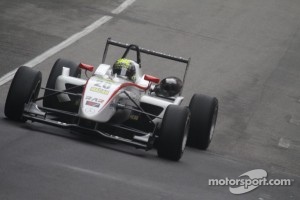 Munoz threw it off at Lisboa on the same lap, and never came back but at least he wasn’t blocking the track. Magnussen, meanwhile, had climbed to 8th, and Sims was up to 14th at the expense of Bradley, but that wasn’t where the interest really lay. Nasr was now after Juncadella while Wittmann launched a fight-back, passing van Asseldonk for 4th before setting about hunting down Sekiguchi. A lap later and Nasr was visibly gaining on Juncadella, while Magnussen was. With three laps left Wittmann outdragged Sekiguchi into Lisboa, and started to close the gap to Nasr. Nasr was closing on Juncadella and it began to look as if the finish would be incredibly close. At the same time da Costa pulled into the pits and called it a day, as did Asmer a lap later, which was wise given what happened next.

With Wittmann closing on the lead pair hand over fist, further down Yamauchi was going backwards, while Magnussen was looking for a way past Buller. He didn’t find it. What happened was that Magnussen became embroiled in Yamauchi’s accident, just after Foresti forced his way past the Japanese. In the resulting catastrophe, Lloyd, Sainz and Sims were all taken out as well. With bodywork all over the place, and five drivers stranded, the officials had absolutely no option but to haul out the Safety Car one more time. There was no chance of a restart with only two laps left to run, and so effectively the race was over and Juncadella only had to follow the flashing yellow lights to win.

The final order was Juncadella, much to his own surprise, winning the 58th Macau Grand Prix to his tearful delight. Second was Nasr, disappointed not to win, but philosophical and 3rd went to Wittmann, who was also tearful afterwards, though not for the same reasons as the winner. 4th went to Sekiguchi, from van Asseldonk, Buller, Foresti, Jaafar, Bradley and Fong. In 11th was Fantin, from Sato and Huertas.

The fastest laps of the race went to Wittmann in the Intercontinental Trophy category and Nasr in the general classification.