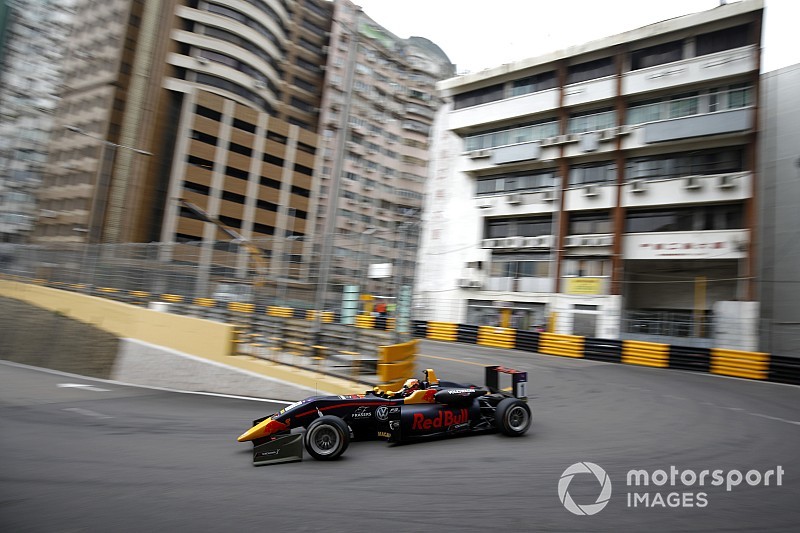 Motopark driver Ticktum, who is bidding to win a second successive Macau GP, ran around in tandem with Carlin F3 returnee Callum Ilott as they set the top two times.

Ticktum’s best was 0.132 seconds quicker than that of Ilott, who was ahead on the road, and with a strong chance of rain on Friday this could be the front row for Saturday’s qualification race.

“It was good but I’m not completely satisfied,” said Ticktum. “There are quite a few improvements to come for the car and the driver, and I need to be doing better than a 2m11.0sec, to be honest.

“The lap was good, I’m not denying that, but it can always be better – I’m not disappointed, but I’m not over the moon either.”

Ticktum did his time on new tyres that were bolted on at the first of three red-flag stoppages.

“That was a good decision by Timo [Rumpfkeil, Motopark boss] and Andy [Kohler, technical director],” he said. “I was on the radio saying, ‘Are you sure?’, but they stuck to it.”

Ilott only fitted two new Yokohamas in the stoppage, so has a two-tyre advantage over most of the other leading contenders for the rest of the weekend.

He gave Ticktum a sniff of a slipstream, adding: “If you’ve got a fast driver in front of you it does help.

“Our track position was good, and where we are in the pits [over halfway down the field] I’m not in a position to get a slipstream from who I want to.

“Every lap I did was without a tow.”

F3 European champion Mick Schumacher moved up to third spot just before the second red flag, with one of the last improvements of the session in his Prema Powerteam car.

At the same time, Jake Hughes impressively darted up to fourth spot with Hitech GP, the Brit, like Ilott, returning to F3 from GP3 for the weekend.

Super Formula star Yuhi Sekiguchi briefly held third spot in his B-Max Racing car, with a time that ended up fifth fastest, one spot ahead of Carlin’s Sacha Fenestraz. The Frenchman made light head-on contact with the barrier at Police, before heading to the pits for a front-wing change.

Joel Eriksson was quickest at the first stoppage from Motopark team-mate Juri Vips, but both delayed their exits from the pits and then got mired in traffic – they failed to improve and slumped to seventh and 11th respectively.

The first two red flags were both caused by Hitech drivers crashing at Police, with Charles Leong in the wall after 14 minutes and Enaam Ahmed with six minutes to go.

Any chance of improvement in the final few minutes was wrecked when Toda Racing’s Sena Sakaguchi shunted at R Bend, causing the final stoppage.