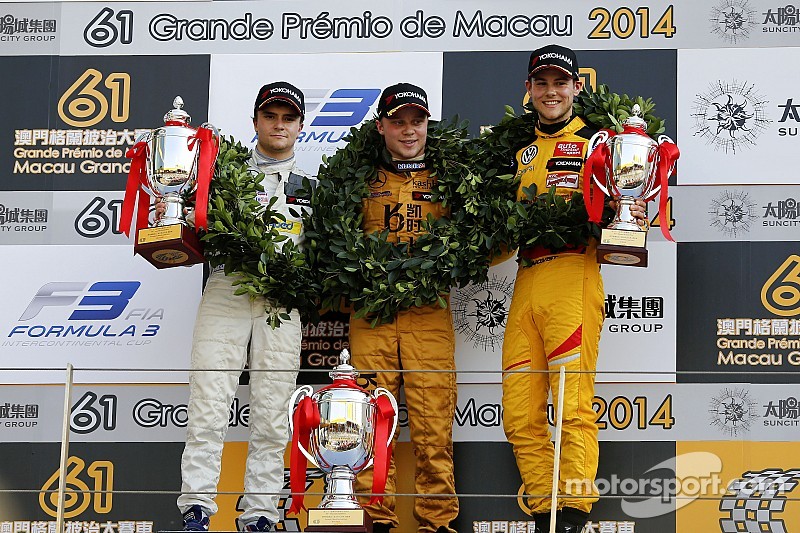 At Macau this afternoon age and cunning proved the better combination than youth and enthusiasm, as Felix Rosenqvist (Kashbet.com by Mücke Motorsport) claimed victory and 3rd thereby pole position for Sunday’s 61st running the of the Grand Prix, despite the best efforts of Lucas Auer (kfzteile24 Mücke Motorsport) and teen sensation Max Verstappen (Van Amersfoort Racing). 3rd place at the end of the Safety Car disrupted event went to Tom Blomqvist (Jagonya Ayam with Carlin).

It could all have been very different. Although Rosenqvist started on pole and was still ahead at Mandarin, by Lisboa it had all changed with Auer going through in the classic Macau overtaking move, with Verstappen following through as well. Rosenqvist was 3rd. In the middle of the pack, meanwhile, the usual chaos had broken out as Antonio Giovinazzi (Jagonya Ayam with Carlin) got knocked off course and out of the race, along with Alex Palou (Fortec Motorsport), while fellow Jagonya Ayam with Carlin runner Sean Gelael sustained damage and had to pit. Additionally Markus Pommer (Motorpark) got left behind on the grid when he managed to stall at the lights.

Of course, losing the lead after the start was exactly what I didn’t want to happen, but starting from pole and then losing first place on the long straight is a usual thing here in Macau,

Somewhere in all of that William Buller (Signature) sustained front and rear wing damage and had to pit for repairs. It was hard to tell who was to blame for the mayhem, but Buller has form so may have had at least a hand in it…

That left yellow flags all over sector 2, although Rosenqvist was all over Verstappen in the first sector as they ran towards Lisboa for the second time. The Dutch teenager held the experienced Swede off that time, and Felix settled down to wait. Meanwhile, up to 6th apparently unscathed was Roberto Merhi (Double R Racing), the Spaniard, who has already made his F1 debut seemingly immune to the lunacy that was the first lap. He was now hard on the heels of the battle for 4th, with Blomqvist having to hold off Esteban Ocon (Prema Powerteam), and now the hugely experienced Merhi as well.

Just behind them, Nick Cassidy (ThreeBond with T-Sport) was also holding steady, despite being another Macau rookie, while Nicholas Latifi (Prema Powerteam), Jordan King (Carlin) and Stefano Coletti (Eurointernational) all loomed in his mirrors.

A lap later Rosenqvist had another go at Verstappen into Lisboa, and was again rebuffed, and all the while Auer was opening as big a gap as he could manage, hoping against hope that nothing would happen that would necessitate a Safety Car. His prayers were not answered. Just as Buller rejoined the race a handful of laps down, Verstappen could be seen limping round with front end damage, the right hand tyre punctured and the left wheel hanging off at a jaunty angle. He was still somehow driving it, though Melco proved something of a challenge and required him to execute a 3-point turn to continue.

I am very confident and have very good tyres for tomorrow. I shall go for a full attack for the win and the safety car will be interesting.

It turned out that he had made a rookie mistake out in the mountain section and braked too late, modifying his suspension against the Armco. He eventually limped back to the pits and retired from the race. Meanwhile, in the group behind, Latifi lost a place to King, and Antonio Fuoco (Prema Powerteam) and Felix Serralles (Team West-Tec F3) were both chasing down Coletti. It had the potential to get messy out there. Elsewhere Sam Macleod’s weekend had continued as it started, and the Tom’s run youngster was off in a wall somewhere around Police. He got out promptly but had nowhere to go once he’d clambered on top of the wall, and so the customary Safety Car period began on Lap 4.

The Safety Car initially picked up Richard “Spike” Goddard (ThreeBond with T-Sport) instead of Auer, and so that took some sorting out, Gelael diving back into the pits and into retirement to get out of the way of the pack. When everyone was where they were supposed to be it became clear that the order now was Auer, Rosenqvist, Blomqvist, Ocon, Merhi, Cassidy, King, Latifi, Coletti and Serralles. Just outside the top ten was Fuoco, from Santino Ferrucci (Fortec Motorsport), Yu Kanamaru (Carlin), Kenta Yamashita (Tom’s), Tatiana Calderon (JZR/Mücke Motorsport), Gustavo Menezes (Van Amersfoort Racing), Goddard, Hongwei “Martin” Cao (), Dan Wells (Toda) and Mitsumari Takaboshi (B-Max Racing Team).

I’m pretty pleased with my podium today but the main race is tomorrow.

Andy Chang was 21st in the other Team West-Tec F3 car, from Pommer and Buller, the latter several laps adrift now.

The Safety Car lights finally went out on lap 7 so there was now the prospect of a three-lap sprint to the line. Auer knew he had a problem in the shape of Rosenqvist as the race went live lHe pulled out toward the outside of the corner and shot through to take the lead.

Rosenqvist wasn’t the only one to try and take advantage of the way they had been bunched together again, Ocon for one looking quite hard at the possibility of passing Blomqvist. Tom resisted and held his place, but further back Cassidy got the drop on Merhi, while Latifi passed King to reclaim 7th, and Serralles snatched 9th from Coletti.

A delighted Rosenqvist came home to victory and will start tomorrow’s race from pole though he’d not started out that happy: “Exactly the thing that I didn’t want to happen at the start happened. I was leading into Mandarin but lost it before Lisboa which was not optimal. (Max) braked too late and slid into the wall and I overtook him but it’s quite a shame for him but anyone could make that mistake. He just made my life a little easier.

But the safety car played out quite well and during the restart in the straight I got past Lucas. Just as well as I had a flat spotted front tyre. But after the safety car went in there was only 2 more laps and nothing special happened after that. As long as I was in the top 3, as Lucas said, that’s what matters for tomorrow. If I also have a bit of luck down to Lisboa tomorrow but if the safety car comes out I will make the best of the situation. I’d like to say thank you to the team for such a quick car.

Auer was content with 2nd: “Many thanks to the team and Mercedes for such incredible days. When the safety car came out I made a very good start I thought and tried to control it into the first corner. I am very confident and have very good tyres for tomorrow. I shall go for a full attack for the win and the safety car will be interesting.”

Blomqvist also knows it’s still all to play for: “I’m pretty pleased with my podium today but the main race is tomorrow. I did the best job I could and 3rd on the grid means I’m not so vulnerable to start the race. Today it was not possible to pass on the 1st corner as there was oil on the track and it was very slippery round there. We all want to go out there to win tomorrow. That’s no. 1 job done but we’ve a far way to go yet.”