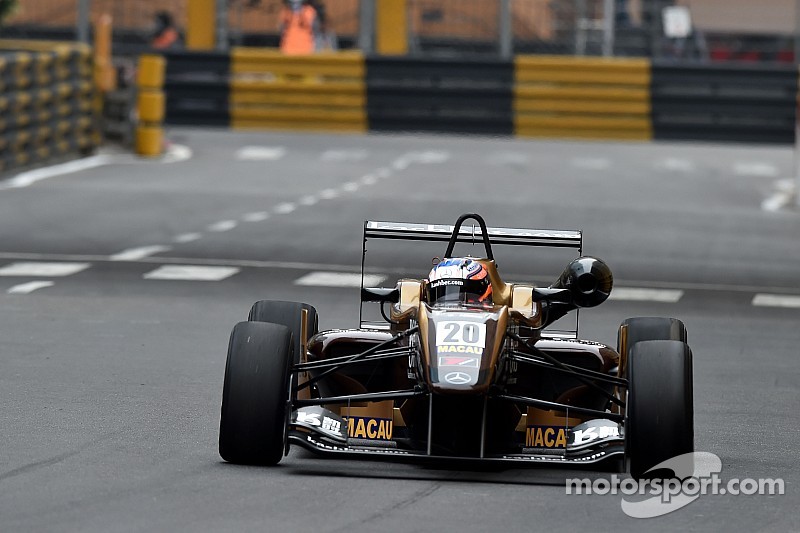 The lineup is set for the classic in Macau

At Macau this afternoon Felix Rosenqvist (Mücke Motorsport) claimed pole despite a slightly hairy free practice session, beating out Esteban Ocon (Prema Powerteam) by almost a quarter of a second in a session that was curtailed by a red flag just as some drivers were getting ready for one or two last flying laps before the chequered flag. 3rd fastest overall (and fastest Macau rookie) was Max Verstappen (Van Amersfoort Racing), though he and Ocon both picked up two-grid place penalties for failing to have the cars weighed when directed to do so. That promotes Rosenqvist’s team-mate Lucas Auer to the front row for Saturday’s Qualification Race.

At the start things got messy quite early on, with a series of very rapid fire yellow flag periods, the first one before anyone had started a flying lap. Most of them were of the blink and miss them types, and seemed to be occasioned by the amount of oil on the track after several smashes in the local GT and Touring car practice sessions. No one was coming to any real harm, and mostly it seemed to involve a short trip up the Lisboa escape road.

Once the times started being set it soon became obvious that this was going to be a much faster session, at least for those drivers with new tyres to spare. The first time improvements started to come through at about the one-third time mark, with Antonio Fuoco (Prema Powerteam) and Markus Pommer (Motopark) both improving to go 13th and 14th respectively, while Roberto Merhi (Double R Racing) was also getting to grips with an unfamiliar car and was up to 17th.

There was another rash of brief yellow flag periods as people again skated off up the Lisboa escape road, but they were over quickly and they didn’t seem to slow Auer down any. He came round to claim 3rd, just ahead of Stefano Coletti (Eurointernational), the Monegasque not apparently hampered by a broken finger.

It wasn’t long before Verstappen speeded up too, the Dutchman edging Coletti out of 4th. As Santino Ferrucci (Fortec Motorsport) was having a more normal Macau rookie experience back in 15th, the Dutch sensation was driving as if he was on his 3rd or 4th visit, not his first. Shortly after this, the battle for pole really kicked off. Auer went first, setting a time of 2:11.838, only for Ocon to come round in 2:11.742.

Nick Cassidy was the other rookie having a good run, the ThreeBond with T-Sport driver up in 7th as he came in in search of new tyres. While he was doing that, Nicholas Latifi (Prema Powerteam) improved to 5th, and someone – it looked like William Buller in the Signature car – nosed his way into the Lisboa barriers, though the marshals soon sent him on his a way again.

As things speeded up further, Cassidy snatched 7th, while Rosenqvist broke into the top 10, and then, a lap later, came round for 2nd. Cassidy, meanwhile, was temporarily fastest rookie as he got ahead of Verstappen, pushing the Dutchman down to 7th. Merhi was now lurking threateningly just outside the top ten, while King was also pushing hard and was soon 7th. Everything ground to a temporary halt after Coletti slammed into the wall at Post 10, dropping bits of Dallara over a wide area. He was rapidly craned away and the session resumed at a furious pace.

Cassidy grabbed 5th, only to be displaced by King, and the Rosenqvist came round in a stunning 2:11.506, clear of Ocon by quite some margin. Ocon was also now under threat from Verstappen, the teenager digging deep to claim 3rd, just 0.005 slower than Ocon. There was time for one or maybe two more flying laps, and then the yellows came out again. Palou had hit the wall out on the “mountain” and although the marshals sent him on his way, he ground to a complete halt two posts further on.

Setting the rest of the field

That left no choice but to haul out the red flags. With less than three minutes left on the clock it was soon declared that the session would not restart. That meant Rosenqvist was on pole on his fourth visit to this circuit. He was very happy. “Free practice was quite good then I had a stupid spin which was my mistake and I lost 2 tyres. Yesterday I was not so confident but the car felt better today. In qualifying today the first 2 laps was to see how the track was and then I got new tyres. I was on my own not trying to get a tow. The lesson I learnt (from previous visits) is that you have to be there in the qualification race and the last race but you need a bit of luck and to make the best of what happens.”

Ocon wasn’t so happy: “I didn’t have any luck yesterday when I damaged my inside wheel but it was not a proper crash so I didn’t lose confidence. I’m quite happy about things and today we work on my car and I work on myself. This race is as much or more important than the Euroseries championship. Macau is the best race for F3 and the best in the world. I am looking forward to the races tomorrow.”

As for Verstappen, he thought he’d done all he could: “I think we did quite good in qualifying, not bad, but the tyres were overheating. The team have not much experience at Macau so the team and me are both learning and improving all the time. There are still 2 races to go so there should be a good chance for us. It’s a cool track which I enjoy and I am happy to be here.”

Auer was disappointed: “First thanks to the team for how fast the car is. I was not too happy with qualifying 4th but it’s a good position for the 2 races. It should be good and I feel very confident.”

5th went to Blomqvist, who could not improve on his provisional pole from yesterday, ahead of King, Cassidy, Giovinazzi (another who didn’t improve), Latifi and Merhi. 11th was Pommer, from Coletti, Gelael, Pelou, Buller (the third non-improver), Serralles, Ferrucci, Kanamaru and Cao.