LUCA FILIPPI WINS THE RACE AND THE CHAMPIONSHIP Luca Filippi clinches the 1 Csai F.3000 Italia Trophy Championship. The Fisichella Motorsport's driver did not settle with bagging the points he needed to win the title, but wanted to ...

LUCA FILIPPI WINS THE RACE AND THE CHAMPIONSHIP

Luca Filippi clinches the 1 Csai F.3000 Italia Trophy Championship. The Fisichella Motorsport's driver did not settle with bagging the points he needed to win the title, but wanted to take victory in front of his supporters at the Monza circuit. After a hard fought battle, Janis, who was leading during the first half of the race, had to give way to Filippi's continual attacks. Rocha Tuka took an excellent third place in his debut race, ahead of Engel and Ricci. Sixth place for Toni Vilander, ahead of Piccini, who, for the first time this week-end, did not suffer any engine problems and was able to gain many positions. Behind Piccini his Sighinolfi team-mate Auinger, then Ciompi, Caceres and Gattuso, first of the Light category before Solieri.

Commentary -- After a bad start for Filippi, Janis pulls out ahead of Rocha Tuka, Ricci, Filippi and Engel. Filippi very quickly passes the Astromega driver and during the second lap also overtakes Rocha and starts chasing after the Czech. After the second lap, Janis leads the Fisichella driver by 2"488, but during the following laps Filippi narrows the gap to the leader. Behind them Rocha, Ricci, Engel, Vilander, Caceres and Piccini. author of a great recovery. While Ciompi, who had a disastrous start, is in 11th place. At the end of the 4th lap Filippi is faster and faster, while Caceres spins in the first Variante and rejoins the race in last position.

Filippi's chase narrows the gap until the 7th lap when Janis answers with a fast lap which brings the gap back to over a second. Fillippi doesn't give up and during the 9th lap he is biting at the Czech's tail, here is where the real battle for the highest step of the podium begins. During the 11th lap Filippi finally passes Janis at the Parabolica. The Czech answers right back and on lap 13th overtakes Filippi at the second Variante, while Engel passes Ricci, taking 4th place. After two more laps Filippi again overtakes Janis at the first Variabile. This time the Ma-con's driver seems to give up, and on lap 17th Filippi has already a 1"507 lead, which he maintains until the chequered flag that signals his victory in the F.3000 Italia championship. During the parade lap, at the first Variente Filippi climbs onto his Fisichella Motorsport car to salute a group of 300 fans who had arrived from Mondovi, his hometown, to celebrate the victory. 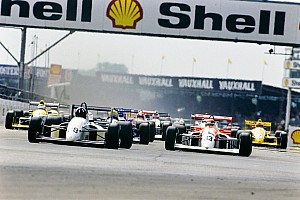 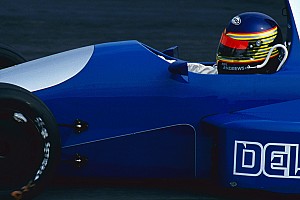