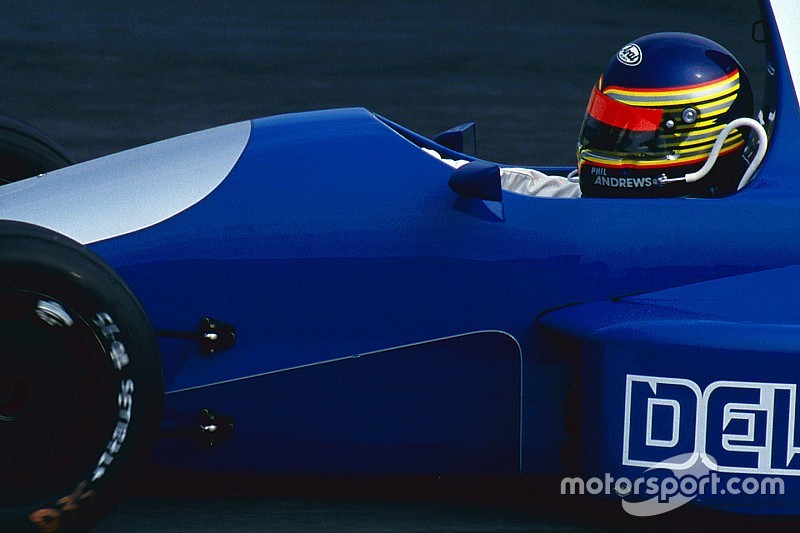 Giovanna Amati is known mainly for being the last woman to be entered in a Formula 1 race, but sometime Formula 3000 racer Phil Andrews remembers her for entirely different reasons, as he explained to Sam Smith.

During the summer of 1990, amid the cauldron that was the International Formula 3000 Championship, the normally affable Phil Andrews was stomping down the Oulton Park paddock looking for blood.

The series’ only female driver, Giovanna Amati, had just driven him off the road at 160mph during a weekday test session prior to the Brands Hatch race the following weekend. She had seemingly caused a cataclysmic accident, from which Andrews was fortunate to emerge with his faculties intact.

His Reynard 90D was less lucky, and was reduced to component form against the unforgiving Oulton Park tyre barriers at the fearsome Druids corner. Its driver was, quite naturally, a little upset.

The build-up to the story had actually begun at a baking hot Hockenheim, a couple of weeks earlier. Andrews takes up the brooding, surreal and perplexing story.

“I was coming up to lap Giovanna during the Hockenheim race,” said Andrews. “Going in to the last chicane I passed her and in so doing she had to go off line a little, no more than that.

"I really thought nothing more of it at all. In fact I was concentrating more on my own problem, as the drinks bag had stopped working pretty early in the race and it was really hot that year. It may even have been the hottest race I ever did.” 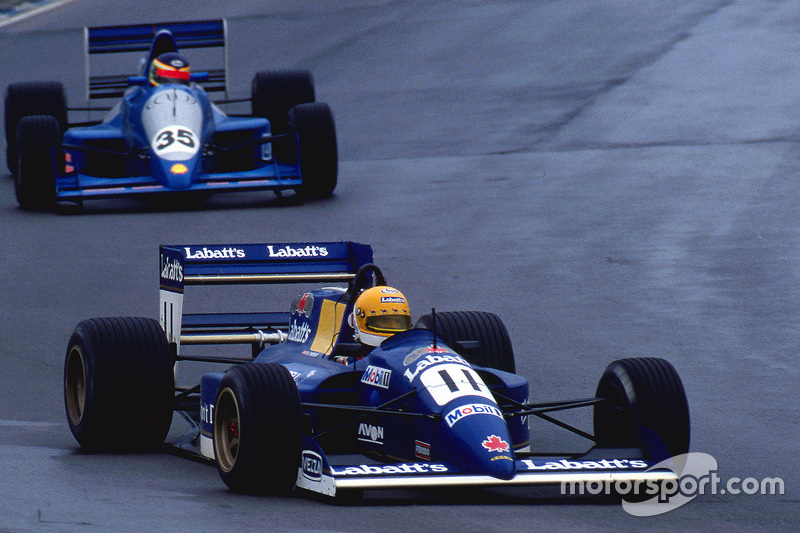 A relatively uneventful race yielded an 11th place finish for Andrews. Superpower, the team co-owned by the uncompromising John MacDonald, was struggling. A radiator design tweak was stifling their progress and things had to change.

Amati, a firebrand in every sense of the word, without knowing it, was about to become the team's saviour. However, this redeemer announced herself in a way no one could have imagined.

“I remember getting out of the car in parc ferme after the Hockenheim race and walking back to our temporary pit outside the F1 garages,” continued Andrews. “I didn’t see or hear anything behind me, but all of a sudden Colin Bennett (Amati’s team manager at CoBRa Motorsport) yelled: ‘Look out Phil’.

"As I swung around, I saw Amati coming for me with a bottle of water (the old school glass variety) in her hand. Let’s just put it this way: she wasn’t going to offer me a drink, not from the way she was carrying it, above her head and with a demonic look on her face!”

Bennett managed to wrest the bottle from her grasp. Andrews was still perplexed as to what might have upset her so much. He didn’t give it a second thought. Adrenaline was still pumping; it was just a misunderstanding and would soon be forgotten, right?

“So we rocked up at Oulton Park for the pre-Brands test a couple of weeks later,” said Andrews. “I had just put some fresh rubber on and I remember coming through the old Knickerbrook, which in 1990 was just a feather off the throttle and then some big commitment to the apex.

"Amati was going slowly up the hill, probably on an in-lap.  I just crested the rise and she jinked to the left sharply. I honestly couldn’t say whether or not she did it on purpose, but it was very odd. It didn’t really matter at that stage because I was about to have the most terrifying accident of my life!”

Andrews watched in horror as his front-right wheel touched Amati’s left rear and the car started to rise up at the front. At approximately 160mph, things weren’t going to end well.

“I can tell you that when a racing car takes off it gets your attention pretty quickly," he said. "All I remember seeing was lovely cloudless blue sky. It stayed that way long enough for me to think, ‘Bloody hell, I’m off in to the trees here.’

"Of course the most terrifying aspect of it was that there was absolutely nothing I could do. No brakes, no steering, just the bloody Cheshire countryside whizzing by to keep me occupied!"

Fortunately the Reynard 90D came down. But now Andrews was heading straight towards the tyre barrier at Druids - and fast.

“I do remember getting out of the car after the impact and looking backwards and seeing the debris field, which was impressive. The gearbox had split more or less from the engine. The grass was on fire from the oil.

"I must have passed out then because the next thing I remember is being in the medical centre. Somehow, I was completely ok. I didn’t have a scratch on me, but I must have cracked my head either when I landed or more likely when my helmet hit the steering wheel as I impacted the tyres.” 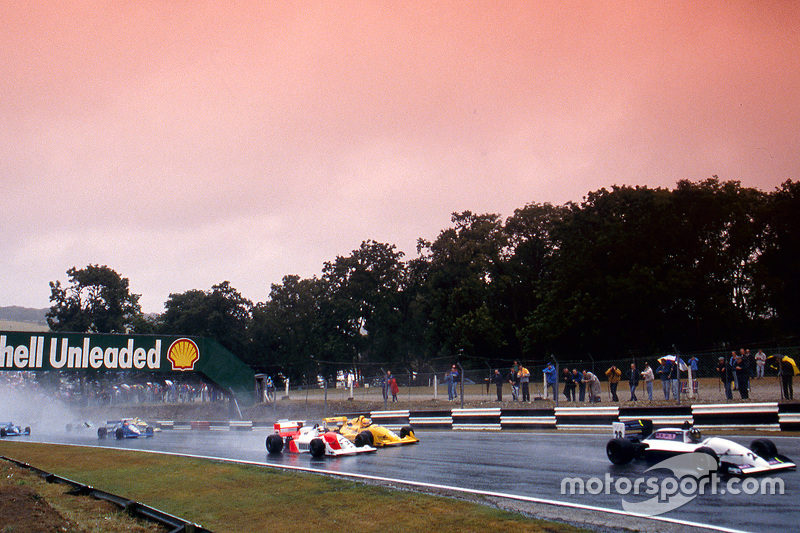 If Andrews felt lucky then, it was nothing compared to what he felt later. His mechanics told him that not even the fire extinguisher was salvageable from the wreckage. The reason was that the front left suspension had punctured its way through the tub and sliced the top of it off. An inch higher and his left leg would have been a kebab!

“I can’t remember when the anger took over,” recalled Andrews. “But after I got checked out at the medical centre, I saw that Amati was waiting at the end of the pitlane for the session to restart again. I went up to the car and told her to get out. She wouldn’t.”

All of a sudden, Giovanna had lost the English she had acquired from racing in the UK for a few years. She didn’t say a word, just gesticulated nervously. An embarrassed Colin Bennett stared at the ground, uncharacteristically quiet.

Andrews was ushered away. In the circumstances, his behaviour was reasonably restrained. Meanwhile, his Superpower-run Reynard 90D was languishing in the paddock skip. The team hot-footed it to Bicester to build up a new car for the Brands Hatch race, which was four days away.

“Amati actually did us a favour,” recounts Andrews. “We hadn’t been on the pace all year for one reason or another. I changed engineers just before the Hockenheim race. Dave ‘Ned’ Kelly (RAM F1 designer) was a great guy, but was replaced by Mick Ralph.

“We changed the tub and at Brands we were bang on the pace. I was second in practice and I qualified fourth with Eddie Irvine on pole ahead of McNish and Damon Hill. So it was an all-British driver lock out on the front two rows, unprecedented really.” 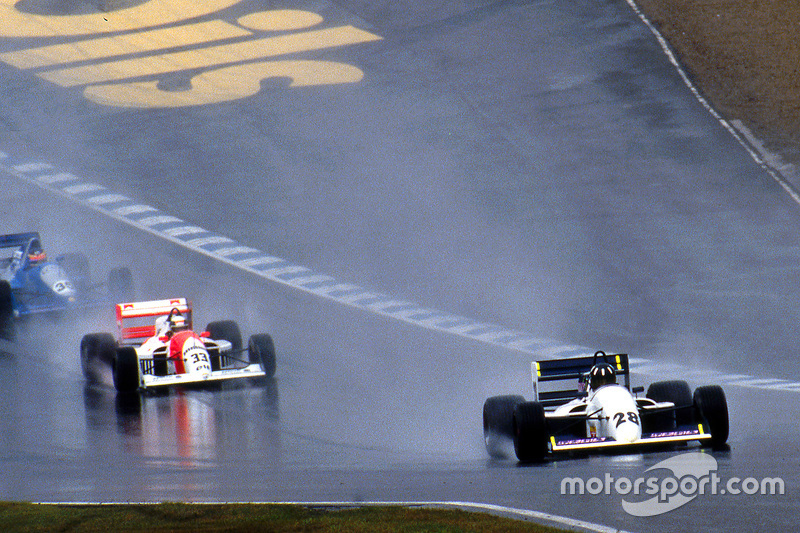 The race was wet, and Phil was holding fourth and looking comfortable until the pit stops, when he dropped back to ninth. Coming back through the field and looking good for a podium, he encountered the late Phillipe Favre coming out of the pits in his Leyton House. Phil was rudely turfed off.

There was no white line rule in those days, and Andrews was covered in gravel at Paddock Hill Bend, slumped in the cockpit, shattered by this latest cruel blow.

It was a microcosm of Andrews’ career. In comparison to his contemporaries Hill, Irvine and McNish, his achievements may look modest on paper.

However, consider occasions such as Brands Hatch in 1990 and the following season, when he went toe-to-toe with Richard Dean, himself possibly the most underrated British driver of the late 1980s and early 90s, in the most competitive British F3000 season on record.

Andrews was no mug, and while he himself would never suggest he could have been a Grand Prix winner, it is certain that he was a seriously capable driver in an era when F3000 genuinely had the cream of the crop of those that were banging on the door of F1.

“The one thing I am proud is that throughout my single-seater career I never entered an easy championship,” he said. “I didn’t go ‘pot hunting’.

"I was always up against the best in FF1600, F3 and F3000. I loved the competition, being able to say I went wheel to wheel with World Champions and Grand Prix winners and sometimes beat them. It gives me great pride to look back now.”