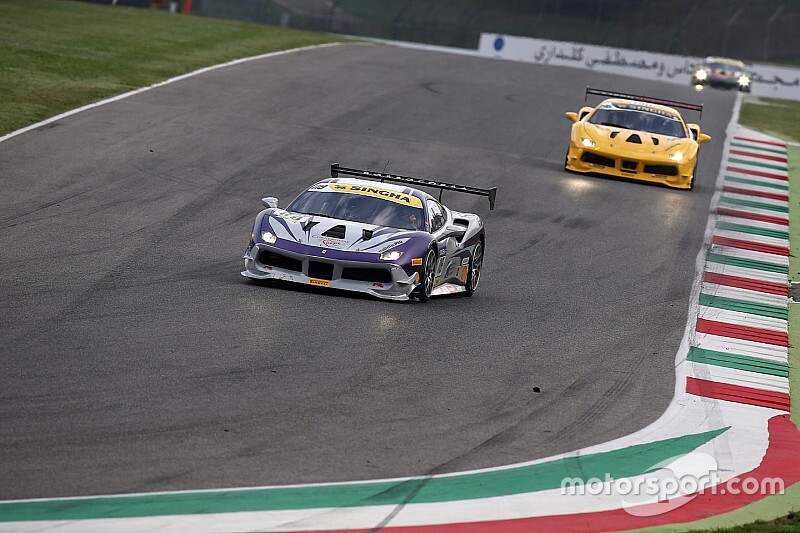 James Weiland capitalised on a mistake from Tani Hanna to take victory on the last lap of the Ferrari Challenge Coppa Shell World Final at Mugello.

American driver Weiland (Rossocorsa), who finished second to Hanna in the Coppa Shell Europe championship, doggedly tracked the Lebanese throughout the race and eventually pressured him into running wide at turn one on the final lap.

Weiland then resisted Hanna’s attempts to re-take the lead with a lunge at turn four to take victory by 3.8s.

Formula Racing’s Hanna had started the race from pole, and held position despite the close attentions of Ernst Kirchmayr (Baron Motorsport) on the run down to the first corner, the pair banging wheels twice before Kirchmayr was turned around by Thomas Gostner.

That started a chain reaction as the spinning Kirchmayr clipped Murat Cuhadaroglu and also forced Gostner’s daughter Corrinna into retirement, while Fons Scheltema (Kessel Racing) and Christian Kinch (Gohm Motorsport) had to take to the gravel in avoidance.

After the inevitable safety car was withdrawn on lap four, Hanna punched in the fastest lap of the race to pull out a one second lead, but was unable to build on it as Weiland – who had taken class spoils in both previous Ferrari Challenge Europe races – steadily reeled him in.

Makoto Fujiwara had an uneventful race to third as the best of the Asia-Pacific contingent, while Brazilian Claude Senhoreti (Ferrari of St. Lauderdale) fended off Japanese driver Ken Abe – who spun on the final corner – to take fourth.

Following his trip through the gravel at turn one, Scheltema came through to sixth – aided by Yanbin Xing having to serve a drive-through penalty for slamming the door shut on Brian Davis at the Casanova downhill-right hand sweeper, causing the American to spin back to last – ahead of Jay Park and the recovering Davis.

A post-race 25-second penalty for contact with Belgian Guy Fawe dropped Kinch back to 11th at the finish, with Tommy Lindroth and the delayed Xing completing the top 10.