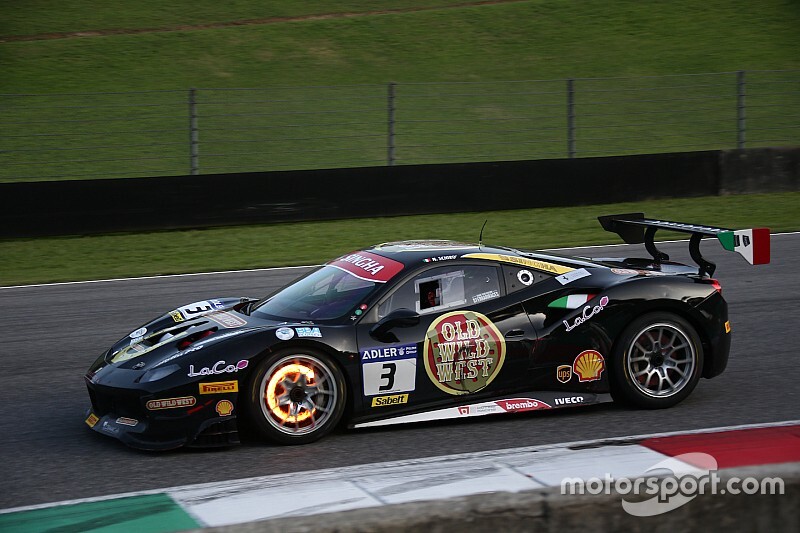 Niccolo Schiro overturned a 13-point deficit to win the Ferrari Challenge Europe title with victory in the final round at Mugello, as rival Louis Prette was given a 25-second penalty.

Despite taking pole, Schrio’s hopes of salvaging the title were slim, as he needed to win with Prette finishing sixth or lower.

Those hopes took a further hit at the start, when Rossocorsa driver Schiro was passed by race one winner Adam Carroll, and Prette (Formula Racing) moved up one position from fifth to fourth.

It wasn’t until lap seven that racing got underway properly, as a safety car was called almost immediately when Swedes Martin Nelson and Christian Kinch clashed at the start, resulting in Nelson’s car momentarily lifting off the ground and spinning into retirement.

When the race restarted on lap three, Shell-Am points leader Agata Smolka hit Corrina Gostner at turn one, putting both into retirement and requiring another safety car intervention.

Schiro took the lead back when Carroll was adjudged to have passed him under waved yellow flags and given a drive-through penalty – eventually finishing 11th – but his job was far from done.

Carroll’s penalty promoted Prette to third behind the fast-starting Sam Smeeth (Baron Motorsport), who had risen from seventh to third at the start.

But Smeeth was unable to live with Schiro’s pace and had a train of seven cars following behind him comprising Prette, Christopher Froggatt, Thomas Neubauer, Bjorn Grossmann, Fabienne Wohlwend, Jonny Laursen and Emanauele Tabacchi.

On lap 11, Prette eventually got the move done on Smeeth around the outside of turn one, which looked set to give him the title.

But moments later, when Neubauer punted Froggatt into the gravel at Arrabiata 2 and the safety car was called, Prette was penalised for overtaking under the safety car.

Although Neubauer was given a 25s penalty of his own for the contact with Froggatt, Prette still tumbled down to 31st overall and sixth in the Pirelli class, handing Schiro the title by one point.

Smeeth and Grossmann completed the podium, with Wohlwend fourth ahead of Pirell-Am champion Tabacchi.