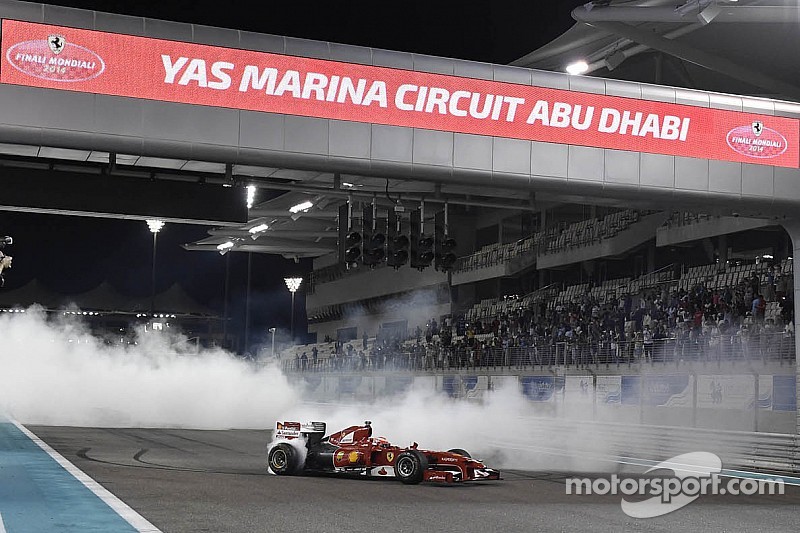 This week’s Finali Mondiali, held for the first time outside Europe, in Abu Dhabi, ended with a day of exciting racing and a demonstration featuring everything that’s best about the world of Ferrari.

The first thrills of the day came courtesy of the two Ferrari Challenge races to allocate the three world titles in Coppa Shell, Pirelli Pro and Pirelli Am. These went to Massimiliano Bianchi, Max Blancardi and Ricardo Perez respectively.

Then, as the sun was setting, over 200 Ferraris from different eras swarmed onto the track, parading around in the very best demonstration of what Ferrari stands for: design, technology and innovation. The marvelous cars which cruised round slowly, driven by their owners, were a big hit with the crowd packing the grandstands and provided the perfect introduction to the grand finale, the Ferrari show.

Getting it all underway were the two AF Corse team GT cars, driven by World Endurance Champions Gimmi Bruni and Toni Vilander, joined on track by team mates Davide Rigon and James Calado. The 458s also put a dummy pit stop with driver change, just as happens for real in the Endurance races, such as the Le Mans 24 Hours.

Then it was the turn of the XX Programme cars, namely the FXX and the 599 XX, which were joined for the first time by the FXX K, which with the head of the test drivers Raffaele De Simone at the wheel, mesmerised the crowd who, up to that point, had only seen it parked in the paddock.

Bringing the Finali Mondiali to a close was the demonstration featuring the Scuderia drivers Kimi Raikkonen and the test driver Marc Gene, who each at the wheel of an F60, put on a great show, featuring simulated starts, wheel to wheel duels and pit stops, the day ending in a cloud of burn-out smoke produced by both drivers. Finally, Managing Directo Amedeo Felisa and Vice President spoke to thank the crowd, the drivers and all the owners, inviting them to return for next next year’s event.