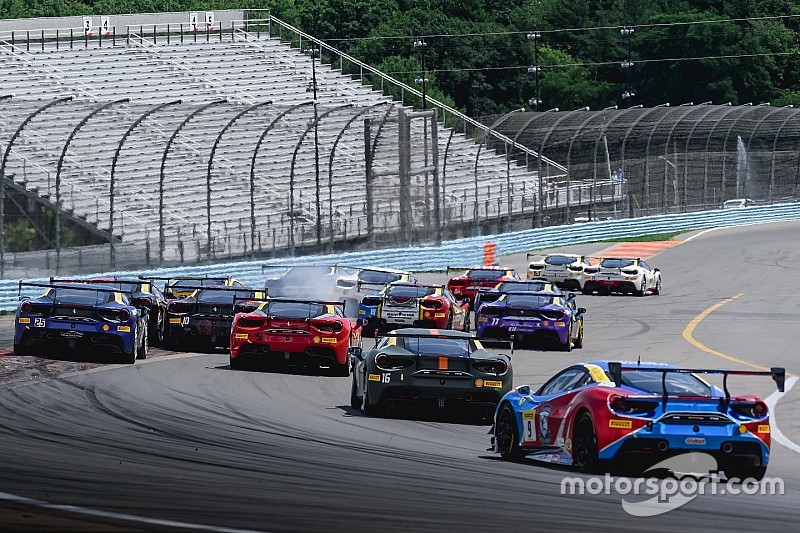 Ferrari Challenge North America returns to action this weekend at Road Atlanta for the final event before the annual World Finals.

55 teams will take part in this weekend's action from the Road Atlanta road course, which precedes the title-deciding Ferrari Finali Mondiali at the Autodromo Nazionale di Monza.

Here is where the contenders stand heading into this upcoming race.

After yet another weekend sweep for Cooper MacNeil (Scuderia Corsa - Ferrari of Beverly Hills), he looks to further solidify his place at the top of the standings with another pair of victories this weekend, which would bring his season total to nine. Peter Ludwig of Wide World Ferrari is his closest challenger, 31 points back of the lead. The title rivals finished 1-2 in both races at WGI, so there's no doubt that they'll be neck-and-neck on track once again at Road Atlanta.

It's a bit tighter in the the AM division with Rob Hodes of Scuderia CAVA - Ferrari looking for his first checkered flag since Race 1 COTA earlier this year. Still, he is in control of the standings with Ferrari of Long Island's Adam Caiola now second in the standings, 19 points back. Ross Chouest (Ferrari of Palm Beach) is another driver to watch following his maiden win of the season at WGI as he attempts to claw his way back into the championship conversation.

On the Coppa Shell side of the grid, you'd have to be a a bit of a gambler to bet against Thomas Tippl. The Scuderia Corsa - Ferrari of Beverly Hills is going after his tenth and eleventh victories in succession, having won every single race this year with the exception of the season-opening first race at Daytona International Speedway. he boasts a commanding championship lead of 77 points over Ferrari of Westlake's Mark Fuller. The only question at Road Atlanta regarding this division will be, can anyone stop Tippl?

The battle at the top of the standings is much more interesting in the Am division with just a three-point split between Kevin Millstein (Scuderia CAVA - Ferrari of San Diego) and John Megrue (Ferrari of Long Island). Although they are the favorites, if either should falter at Road Atlanta, look for Miller Motorcars' Dale Katechi and Cauley Ferrari of Detroit's Brian Simon to pounce. Both are still within striking distance, 16 and 18 points back, respectively.

And yes, the 458 drivers are back again after their long-awaited return at WGI. Ferrari of Ft. Lauderdale's Martin Burrowes continues to lead with a victory in Race 1 at The Glen softening the blow of Race 2 where he only scored a single point. Ferrari of Houston's James Walker stands as the biggest threat to his title hopes presently, 19 points back of the lead. Ron Tonkin Gran Turismo's Trevor Beak is another four points back of him and could potentially muscle his way back into the lead should trouble befall Burrowes this weekend.

The on-track action will begin Thursday morning at 9am E.T. with open practice for the Coppa Shell and CSAM drivers. Trofeo Pirelli and TPAM practice will immediately follow at 10am and the Ferrari 458 drivers will get their first chance on the course at 11:10am on Friday.

Click on the link below for the full schedule of activities from September 13th - 16th.