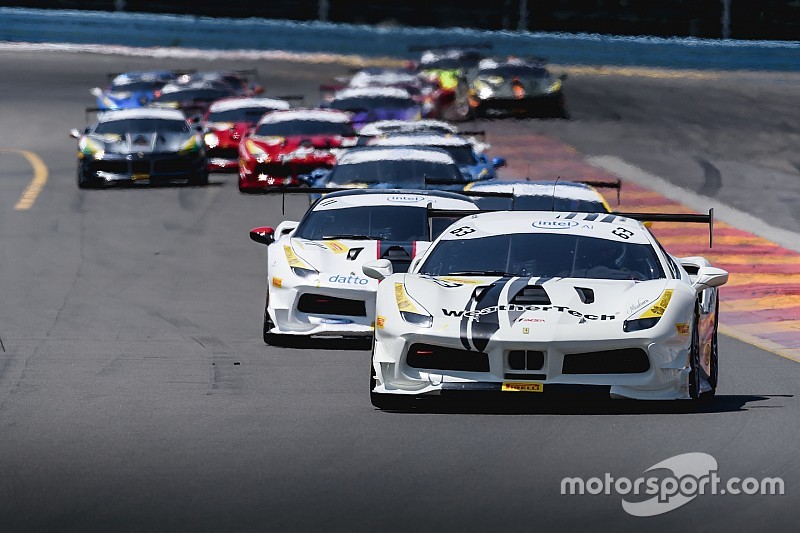 After a perfect weekend for racing at the historic Watkins Glen International circuit, the championship picture for Ferrari Challenge North America looks a bit clearer.

Under blue skies in the scenic Finger Lakes region of New York, 61 cars took to the track for the fifth round of the 2018 season on the 3.5 mile road course.

Scuderia Corsa - Ferrari of Beverly Hills driver Cooper MacNeil has done it again, following up his weekend sweep north of the border at Montreal with another double win weekend at WGI. MacNeil started from pole in Race 1 and controlled the entirety of the caution-plagued race. Title rival Peter Ludwig of Wide World Ferrari finished second, 2.7 seconds back at the finish. Naveen Rao (Scuderia CAVA – Ferrari of San Diego) was initially scored third, but dropped all the way down to tenth after being assessed a time penalty for passing under yellow. Jean-Claude Saada of Boardwalk Ferrari instead claimed the final spot on the podium.

Race 2 was much of the same for MacNeil, who once again controlled the start. Despite a valiant first-lap effort by Ludwig to challenge for the lead, MacNeil was once again able to get away and claim the checkered flag, 2.4 seconds clear of Ludwig. Naveen was able to find redemption following Saturday's penalty, finishing a distant third to the title combatants.

In the AM class, it was Ross Chouest (Ferrari of Palm Beach) claiming his first win of the season, one second up the road from John Boyd (Ferrari of Denver) in second and Murray Rothlander (Ferrari of Vancouver) in third. Rob Hodes of Scuderia CAVA - Ferrari came into the weekend with the points lead, but he took a hit after finishing fourth in class in Race 1.

It was Rothlander's turn to shine in Race 2, earning just his second win of the year, nearly five seconds ahead of his closest competitor. Finishing runner-up was title hopeful Chouest with Hodes third, who maintains his advantage in the championship despite a winless weekend.

Race 2 was much of the same as Tippl dominated the race, which ended under caution. Fuller was once agasin second while while Tippl's teammate Chris Carel (Scuderia Corsa – Ferrari of Beverly Hills) finished third. Tippl will enter the next round with a massive 77pt advantage over his nearest rival.

Although Tippl's dominance is impressive, Kevan Millstein (Scuderia CAVA – Ferrari of San Diego) put on a dominant showing of his own at The Glen, winning by over ten seconds in the AM division for his first win of the year. However, that, and a strong showing in Sunday's race allowed him to surge to the top of the points standings. Tomas Cabrerizio (Ferrari of Ft. Lauderdale) finished second before a penalty cost him a place on the podium. Instead, Corsa -Ferrari South Bay's Bradley Smith claimed second with Tomas Cabrerizo (Ferrari Ft Lauderdale) third.

In Race 2, Brian Simon (Cauley Ferrari of Detroit) denied Millstein a weekend sweep, taking the victory ahead of Millstein and Cabrerizo. WGI was nothing short of a disaster for Ferrari of Long Island's John Megrue, who scored just ten points in total.

The 458 drivers were back at it for their penultimate round of the 2018 season, boasting a field of 16 drivers at WGI.

Race 2 was far more chaotic. Drama ensued on the opening lap as Farano led the way from pole position. Burrowes made a brilliant lunge for the lead, but contact from behind sent him spinning and the field fanning out in an effort to avoid a pileup. Thankfully, a multi-car accident was avoided. But bad fortune was not limited to the points leader as Baek fell out of the race with gearbox issues. With their issues, Farano cruised to the win ahead of James Walker (Ferrari of Houston) and Tony Ferraro (Ferrari Ft Lauderdale).

In the points, Burrowes maintains the lead, but by a slimmer margin now and will head into the finale with a 19 point cushion.

Ferrari Challenge in North America will be back in action this September at Road Atlanta in Braselton, Georgia.