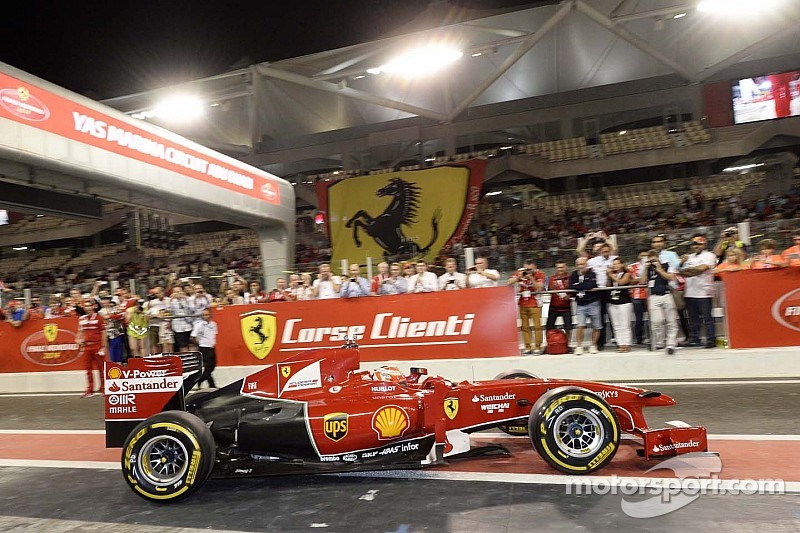 Last night was a gala evening at Ferrari World, the first theme park dedicated to the Prancing Horse, where awards were made to the drivers who have held the name of the Maranello company in high esteem all over the world.

The guest of honour was Kimi Raikkonen, whose achievement in reaching the total of 70 Grands Prix for Scuderia Ferrari was celebrated.

The Finnish driver, who received his award from Managing Director Amedeo Felisa and Vice-President Piero Ferrari, thanked them both and declared: “I’m happy to be a part of this family. I owe Ferrari my only world championship, which I won at the end of an incredible season. Only Ferrari and its tifosi know how to show you so much affection.” There was also recognition shown to test driver Marc Gené, who recently celebrated ten years as a Ferrari driver and whose contribution as a tutor to the clients of Maranello continues to be a crucial one.

In the evening there were then celebrations for the stars of the three series of the Challenge (Europe, North America and Asia-Pacific) in which the final races of the championship have been taking place this week at the spectacular circuit at Yas Marina – and where the world titles will be at stake today. In the European series the winning drivers were Daniele Di Amato, Ezequiel Perez Companc and Massimiliano Bianchi; Ricardo Perez and Chris Ruud dominated the North American series; Max Blancardi, Philippe Prette and David Tjiptobiantoro came out on top in the Asian championship.

The GT drivers were also awarded prizes: among those coming up onto the platform to receive them were Andrea Bertolini, ELMS champion, and Giancarlo Fisichella, winner of the Le Mans 24 Hours – together with “Gimmi” Bruni and Toni Vilander with the 458 Italia of the AF Corse team. The two WEC world champions sent a video message because they are currently in Doha (Qatar) to collect their World Endurance Championship titles. But they are scheduled to be here today, when they will drive their car in the big show that will bring down the curtain on the World Finals in Abu Dhabi, the first to take place outside the borders of Europe.

Raikkonen: "Working together in the same direction"