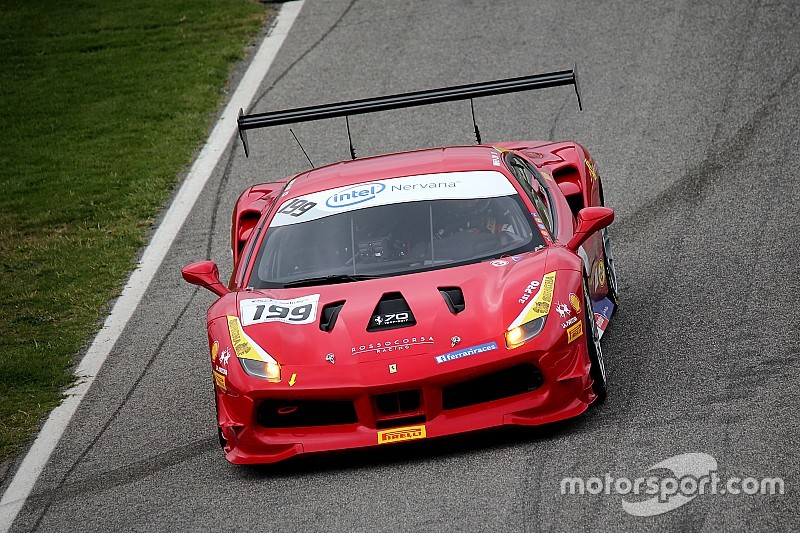 Ludwig then took a bizarre trip through the gravel through the quick left-right of Luco and Poggio Secco in which he almost collected the midfield runners, releasing Lu from a battle with himself and Fuentes.

In clean air, Lu set about closing down MacNeill with a clear pace advantage.

On the second lap, Lu pulled wide at the end of the Rettilineo straight to go around the outside MacNeil at the first corner hairpin Donato and resisted a brief fightback on the following tour to hold the lead.

The two remained in their own personal battle until the first of two safety cars after Francesco Piovanetti spun his Ferrari of Ft. Lauderdale car into the gravel.

MacNeill threatened to retake the lead by mirroring Lu’s earlier outside pass at Donato but held on to again build an advantage.

It would count for little when star actor Michael Fassbender spun into the gravel to signal a second safety car as he became the third car to go off on a single lap.

He joined the earlier incident of Brian Kaminskey and Luis Perusquia when Kamiskey ran into the gravel and slid back onto the track and into his rival.

At the second restart, Lu was able to make a more comfortable start to defeat MacNeil and take the the title race advantage for the Trofeo Pirelli crown.

Fuentes took the final podium place ahead of the recovery driver of Peter Ludwig.

Karl Williams took another step towards the Coppa Shell class title after finishing three places ahead of Barry Zekelman’s return of eighth. They were split by Marc Muzzo and Joel Weinberger.

Ninth was the Ferrari of Vancouver entry of Murray Rothlander ahead of Chris Cangazzi, who lost ground in the title battle with Muzzo for the Trofeo Pirelli amateur crown.