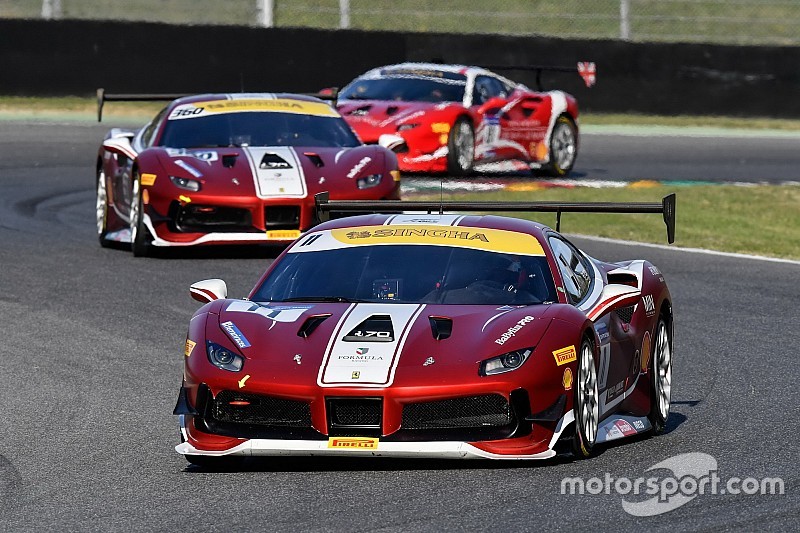 A late safety car following a crash between Vladimir Hladik’s Baron Service Ferrari and the car of Manuel Gostner’s Ineco entry collected Briton Chris Froggatt, and set up a last lap dash to the finish in which Marc Brough and Joshua Catru spun after contact and nearly collected several cars.

But with Nielsen and Leimer well clear further up the field, Nielsen strolled to the finish ahead of his race-long rival.

Leimer had threatened early in the race, attempting a pass around the outside at the first corner on the opening lap and again at the midway point, but never looked like completing an overtake.

The top two had pulled well clear of Philipp Baron, who made life difficult for himself by repeatedly touching the grass at various corners and allowing the sister Octane 126 Ferrari of Bjorn Grossmann to close in.

But Grossman was unable to take advantage and finished fourth.

Sam Smeeth had been in a race-long battle with Alessandro Vezzoni’s Rossocorsa Ferrari but came out on top to take fifth as Vezzoni slipped to seventh behind Henry Hassid, who now has one hand on the Coppa Shell class title.

The race finish was frantic, with Brough and Catru spinning at the final corner after contact and almost collecting several other cars as they slid into the gravel on the last lap.