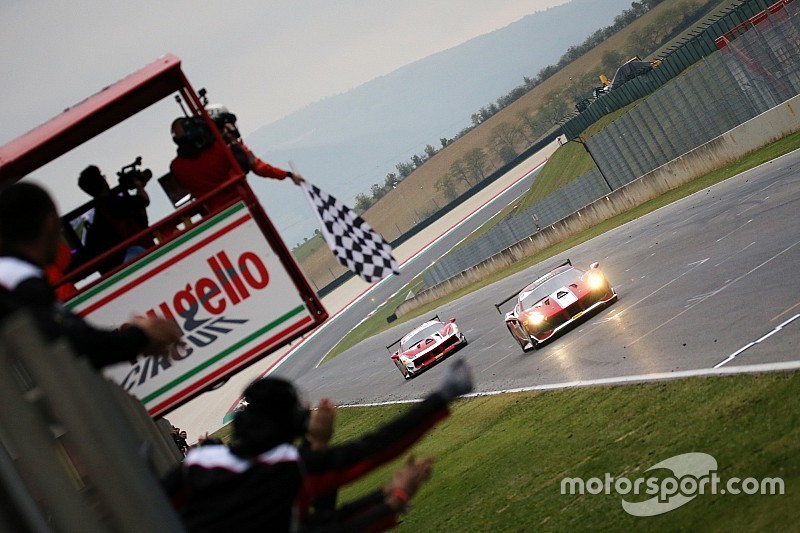 ADAC Formula 4 driver Nicklas Nielsen made it back-to-back wins in the Ferrari Challenge Europe finale at Mugello in a race shortened by a red flag.

Polesitter Nielsen again qualified ahead of 2013 GP2 champion Leimer and the Formula Racing driver had to hold off the second-placed driver through the opening corners.

Nielsen shut the door at the end of the quick left-right turns of Luco and Poggio Secco to hold his lead.

The pair swapped quickest laps throughout the nine laps of the race, but Leimer could not make sufficient progress to challenge for the lead.

Their battle was then ended on the ninth lap when Britcar regular Bonamy Grimes spun his Ferrari on the exit of the final corner and rolled back into the middle of the track.

While most of the field was able to evade the stricken Stratstone Ferrari, Toni Hanna struck the front of Grimes’ Ferrari and sent the pair off track with large chunks of debris strewn across the Mugello circuit.

The race was instantly red-flagged and Nielsen declared the winner ahead of Leimer.

Bjorn Grossmann ran a lonely race to third, coming after Philipp Baron pulled off track slowly before crawling back to the pits to retire. Sam Smeeth was fourth, ahead of Henry Hassid.

Seventh was Fabienne Wohlwend, some way clear of the eighth-placed Rossocorsa Ferrari of Alessandro Vezzoni.