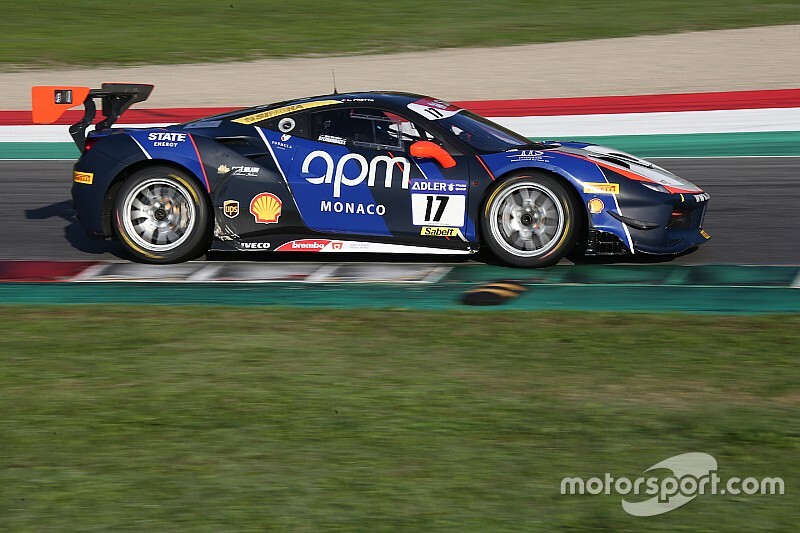 Louis Prette has been crowned Ferrari Challenge Europe champion after a steward’s review into overtaking under yellow flags in race two resulted in penalties for six other drivers.

Prette had finished the race second on the road behind title rival Niccolo Schiro, but was penalised 25 seconds for overtaking under yellow flag conditions on the first lap, following a crash involving Martin Nelson and Christian Kinch within moments of the race start.

With the pack condensed behind the safety car, the penalty dropped him to 31st position overall and sixth in class, giving Schiro the title by one point.

But following an appeal from Prette’s Formula Racing team, Sam Smeeth and Fabienne Wohlwend have been given the same penalty as Prette, promoting him to fourth position in the Pirelli [Pro] class and the title by three points over Schiro.

Thomas Neubauer and Christopher Froggatt, who came together late in the race, along with Tommaso Rocca and Per Nielsen, were also penalised for the same offence, but were already classified behind Prette.

“In the end we did the right thing with the team, we went up and justice was made,” Prette told Motorsport.com.

“When I realised I did the mistake, I thought it was done. But then when we looked at the video again, we saw that everyone did it and I still had hope because if everybody does it, then I’m not the only one that has to be penalised.

“Hopefully it will open a few doors for next year. When I see what Nicklas [Neilsen, 2018 champion] is doing right now, it’s pretty awesome, so let’s see what comes next.

"I have no clue at the moment what I’m going to do next year, but I’m sure it’s going to be something else.”

Schiro retains his victory over Bjorn Grossmann, with Pirelli-Am champion Emmanuele Tabacchi finishing third overall. Adam Carroll, who led the race until he was given a drive-through penalty for passing Schiro on the opening lap, is promoted to third in class and ninth overall by the mass of penalties.

Carroll told Motorsport.com that he couldn’t see the yellow flags because his view of the marshal post was obstructed by Schiro’s car.

“As we went into turn two, then the marshal’s post is far over to the left as well so it’s not easy to see, and the position of [Schiro’s] car actually blocked the post so I couldn’t physically see it,” Carroll explained.

“And then when he slowed up, he was off-line so I thought he genuinely had a technical issue and was just moving out of the way.

“Some championships will say ‘give the place back and it’s okay’ but here they don’t, if you pass under a yellow you get a drive-through penalty and that’s it. There was nothing we could do.”