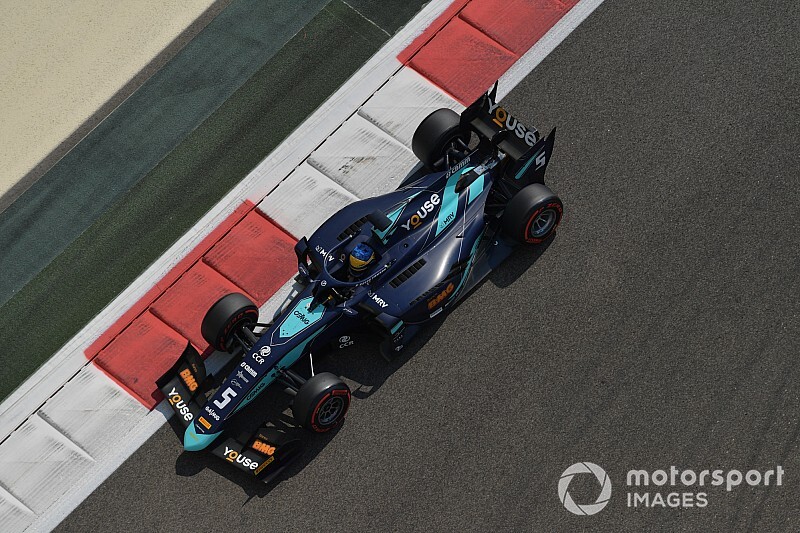 Sergio Sette Camara led a DAMS 1-2 in final Formula 2 practice of 2019 in Abu Dhabi, as a crash for Matevos Isaakyan brought the session to an early halt.

It was Nyck de Vries who set the pace in the beginning with a time of 1m52.771s, before a flurry of improvements dropped the newly-crowned champion to 10th at the midway point of the session.

Sette Camara assumed the top spot by breaking the 1m52s barrier, with teammate Nicholas Latifi improving soon after to establish a DAMS 1-2.

Sette Camara’s benchmark of 1m51.941s was expected to be overhauled as the track evolved, but Isaakyan clattered into the barriers at turn 19 with just over 10 minutes to go, bringing out the red flags.

With just four minutes left on the clock it was declared that the session will not be restarted, which meant the order remained largely the same as it was after the first runs.

Sette Camara topped the session ahead of Latifi, with Virtuosi’s Guanyu Zhou finishing just 0.001s behind in third.

Luca Ghiotto was sixth in the second of the Virtuosi’s entries, with Carlin’s Nobuharu Matsushita and ART driver Nikita Mazepin seventh and eighth respectively.

Prema’s Mick Schumacher had a major slide at turn 21 en route to ninth ahead of de Vries, who rounded off the top 10.

Renault junior Christian Lundgaard was classified 18th on his F2 debut, 2.9s off the leader’s pace.

Meanwhile, Mahaveer Raghunathan will start the feature race from the pitlane after having not followed the correct practice start procedure during the 45-minute session.

A statement from F2 read: "The Indian racer carried out a practice start even though two cars were ahead of him on the grid, and as a result the stewards were forced to hand him a penalty."