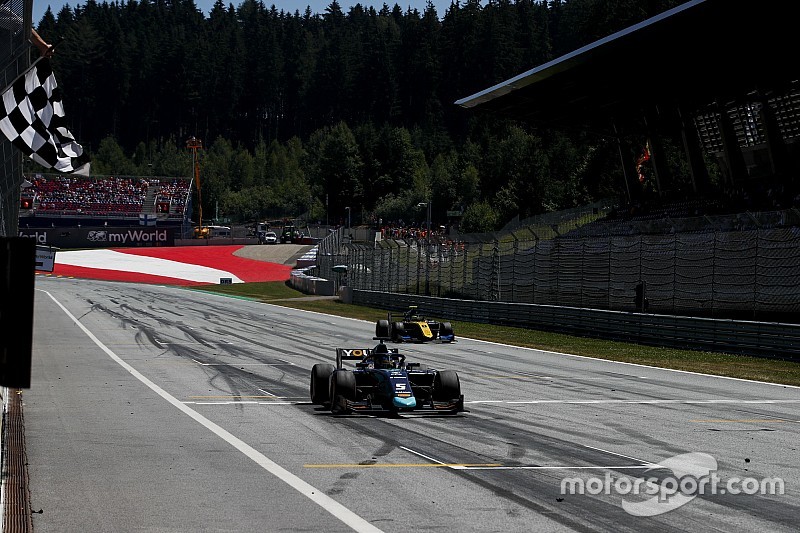 It was a frenetic opening lap, where MP Motorsport driver Jordan King managed to hold the lead from pole.

In a melee at Turn 4, Guan Yu Zhou was pushed wide and Nyck de Vries moved up to third behind Carlin's Louis Deletraz.

De Vries was the clear form-man in the early stages taking the lead on lap 3. But one lap later his pit limiter activated at the exit of Turn 4, dropping him to fifth.

That triggered a four-wide bid for the lead on the run to Turn 4 a lap later, where Sette Camara emerged as the leader ahead of Louis Deletraz, Guan Yu Zhou and Luca Ghiotto.

The four remained in order until a bizarre crash for Deletraz at Turn 1 on lap 20 of 28, where his rear snapped loose and he hit the wall heavily.

That induced a long safety car period. It restarted on lap 23 and Sette Camara got a demon restart pulling 1.5s on Ghiotto, which was key to the win he held on to ahead of a resurgent Ghiotto in the closing laps.

Virtuosi Racing driver Ghiotto had gone two weekends without points but corrected that in Austria.

His teammate Zhou had a poor restart and immediately lost out to de Vries, while Schumacher continued his momentum after a technical issue confined him to a pitlane start the day before.

Schumacher past Zhou for fourth and then hassled de Vries for the final podium spot over the last two laps, but de Vries defended excellently to rob Schumacher of a podium.

Fourth for Schumacher ended a run of seven races without points in his maiden F2 season.

Zhou fell further down the order in the closing stages. Feature race winner Nobuharu Matsushita was in the gravel at Turn 4 on the opening lap, but fought back brilliantly to take fifth ahead of Nicholas Latifi.