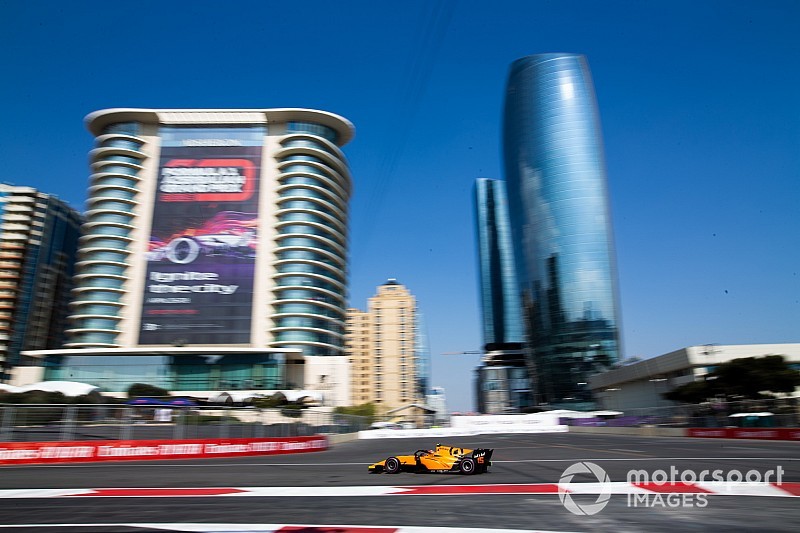 Aitken moved up to third from eighth after a chaotic start where several drivers went off at Turn 1 including Mick Schumacher, who divebombed and forced Luca Ghiotto wide.

Giuliano Alesi also hit his Trident teammate Ralph Boschung at the same corner, forcing the Frenchman to retire and Boschung to pit and drop off the lead lap.

The chaos brought out the safety car with Nyck de Vries, who passed pole-sitter Nobuharu Matsushita at the first corner, leading the way.

While ART driver de Vries was dominant after the restart, Matsushita's Carlin car slowed just four laps into the race and he was out of contention.

Soon after, the field completed their mandatory stops with everyone except Tatiana Calderon starting on the softer of the two compounds.

De Vries had a slow stop and had his four-second lead over Aitken evaporated - while he still rejoined the track in the lead, the Campos driver then made a swift move for the lead at Turn 2.

As de Vries also fell behind Nicholas Latifi (DAMS), and the virtual safety car temporarily came out due to Schumacher spinning out, Aitken was able to build a small lead.

But de Vries quickly repassed Latifi and started to close the gap - only for the Safety Car to appear again, this time for Guan Yu Zhou hitting the wall, just as the Dutchman got within DRS range.

After two laps, the race was set to resume but Ghiotto sent Sergio Sette Camara into a spin as the field bunched up behind Aitken on the main straight.

That kept the safety car out for two more laps and when the restart eventually happened, Aitken was able to pull away and stay ahead in the last three laps of the race to win by 2.2 seconds.

De Vries took second as MP's Jordan King stole the final podium position from Latifi with an impressive move on the outside of Turn 3.

Aitken's Campos teammate Dorian Boccolacci was fifth with Ghiotto (UNI-Virtuosi) taking a provisional sixth, as he is under investigation for hitting Sette Camara behind the safety car.

Sean Gelael (Prema) recovered to seventh from last place on the grid with Juan Manuel Correa (Sauber Junior Team) surviving an off-track moment and contact with Zhou to finish eighth.

Former GP3 teammates and rivals Nikita Mazepin and Anthoine Hubert both went wide during the race and only salvaged ninth and 10th respectively.

Mahaveer Raghunathan (MP) was 11th ahead of the last two finishers, Boschung and Matsushita.

Calderon's and Callum Ilott's respective cars died during the second Safety Car period, as Louis Deletraz also hit the back of Boccolacci at the same time Ghiotto spun Sette Camara.

UPDATE: Ghiotto was handed a five-second time penalty for hitting Sette Camara, dropping him from sixth to ninth. It promotes Gelael to sixth, Correa to seventh and Mazepin to eighth, with the Russian also inheriting reverse grid pole for Sunday's sprint race.

Boccolacci was handed a two-place grid penalty for the sprint race for failing to enter the pitlane post-race when instructed by the Race Director. He will therefore start sixth.