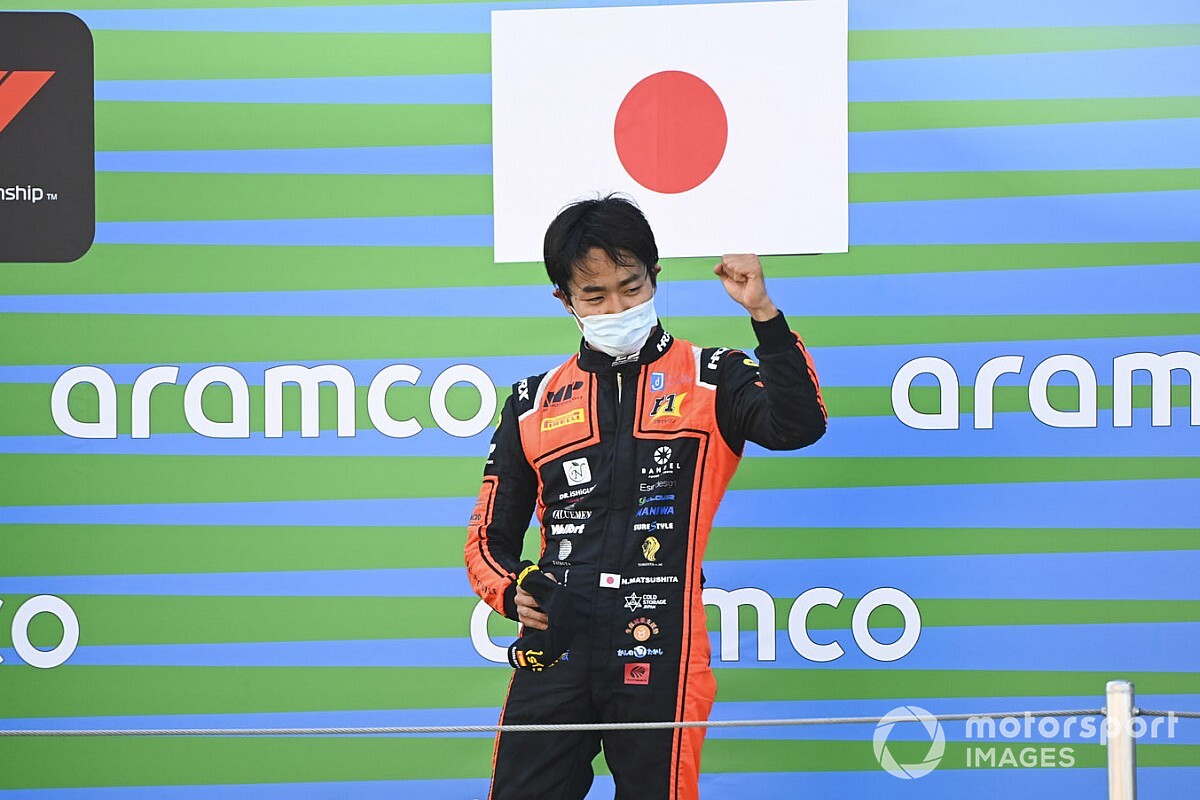 Nobuharu Matsushita pulled off a strategy masterclass in the FIA Formula 2 feature race at the Barcelona circuit to score an unlikely victory after starting only 18th.

The Japanese driver bolted for a second set of soft tyres during a safety car period to climb 14 places before then passing late leader Yuki Tsunoda and hot favourite Callum Ilott.

Another late safety car incident left only one lap of green flag racing, but MP Motorsport driver Matsushita pulled away strongly to bag his fifth series triumph by 1.6s over Robert Shwartzman.

Shwartzman claimed the early lead after a strong getaway enabled him to pass polesitter Ilott into Turn 1.

The soft-tyre-shod duo were joined by fifth-starting Mick Schumacher, who made a blinding launch on the hard compound to relegate his row-two rivals and slingshot around the outside into third place.

A first of three safety cars was trigged through Turn 4 on the opening lap after Ferrari junior Marcus Armstrong dropped his ART Grand Prix car all on his own and beached it in the gravel.

This was followed by a processional restart on lap three of 37, with Shwartzman avoiding a challenge in his bid to bounce back from a torrid time at Silverstone in the 70th Anniversary GP support races.

But when the DRS was activated, Prema Racing driver Shwartzmann was left prey to the advances of Ilott, who swept by on the main straight to assume the lead of the race.

As Shwartzman struggled on his scrubbed soft tyres, he headed for the pitlane and gave Schumacher clear air in second.

Two laps after Shwartzman, who made a poor getaway from his pit box after spinning the rear wheels, Ilott would also head for a change of tyres and resume ahead of his rival in 11th.

That left Schumacher on a contra-strategy with a 33s cushion, but Ilott would at his worst find 1s a gap and even more when the race leader kept making mistakes and running wide.

Schumacher managed to stay on track until lap 23 before making his switch to the soft tyres but he resumed down in 13th after Ilott had cycled through to lead the pack.

When another safety car was called, this time for the stalled HWA machine of Giuliano Alesi, who spun after contact with Sean Gelael’s DAMS, again Ilott would pit for fresh tyres.

Yuki Tsundoa on his ruined and aged rubber hung on well at the restart, which forced Ilott to attempt a pass before DRS returned in an effort to keep the advances of Matsushita - also stopping again - at bay.

But Honda F1 protege Tsunoda defended valiantly, which compromised Ilott’s line through Turn 4 as he attempted a pass, allowing Matsushita to sweep by around the outside into an unexpected lead.

When a third caution period was required after Williams F1 free practice runner Roy Nissany ran his Trident machine over the Turn 3 marbles and careered into the barrier, all Matsushita had to do was hold the lead for a lap after the race timer had ticked past the one-hour mark.

The 26-year-old pulled it off to take an unlikely win, as pre-event points leader Ilott continued to falter and allowed Shwartzman into second place.

Guanyu Zhou was also on a late charge to demote his Virtuosi teammate, rounding out the podium ahead of a stoic Tsunoda and eventually Ilott in fifth.

Schumacher’s strategy gamble that promised much proved ineffective and he fell to sixth ahead of Felipe Drugovich, the MP Motorsport driver having stretched his soft tyres all the way to lap 13 before stopping.

Luca Ghiotto headed Dan Ticktum across the line as Louis Deletraz rounded out the top 10.